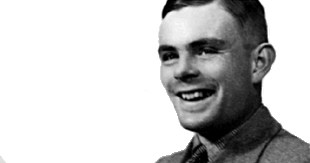 Alan Turing was a British mathematician, code-breaker and computer scientist. He studied math at King’s College, Cambridge and graduated with first-class honours in 1934. Whilst at Cambridge, he wrote an article on the central limit theorem. An idea which explains why many distributions appear to be close to the normal distribution. Due to the high class of this article he was elected a fellow at King’s in 1935. After graduating, Turing wrote a paper on computable numbers, which showed how any mathematical problem could be worked out if it could be represented as an algorithm. Based on this was his own ‘Turing machine’, a simple device which was created to work out the limits of what was computable and what was not.

During the Second World War he was chosen, due to his excellent mathematical capabilities, to be a main cryptanalyst for Britain working at Bletchley Park, helping to break German Ciphers. He developed the bombe machine, a device used for breaking the enigma machine codes which were sent by the Germans to their U-boats in the Battle of the Atlantic (1939-1945). Whilst also using this machine, which searched the codes for answers, he laboured by hand to refine the areas that the machine was searching and eventually they cracked it. This was a significant victory of the war and enabled D-day to happen when it did.

In 1948 Turing was appointed reader for the mathematics department in Manchester. It was during this time that he started considering artificial intelligence and if a machine could ever be as intelligent as a human. For this reason, he devised the Turing test. The computer was deemed intelligent if a human judge couldn’t tell it apart from a human being when in conversation. Also during this time he developed the LU decomposition method which is used nowadays for solving an equations matrix.

In 1952 Turing started his work on a new branch of mathematics; mathematical biology. He studied animals and plants and questioned why some have stripes and some spots and some more of these characteristics and some fewer. Upon this subject he published the paper, The Chemical Basis of Morphogenesis, which included the equation he had developed to show why these things happen.

Unfortunately, also in 1952, Turing was tried and convicted to homosexuality. Instead of going to prison, he agreed to chemical castration and had oestrogen injections for a year. As well as changing his body, this hormone also changed his mind and he found himself frequently spending time doing nothing productive, something which had never been a problem for him before. Because of his involvement in the war time cryptanalysis, Turing was watched after being convicted and felt increasingly more and more trapped. On 7th June 1954, Turing committed suicide through cyanide poisoning. This was agreed by many to be a waste of a great mathematical and scientific brain and in 2009 a formal apology by the British Government was made for the treatment of Turing.

With special thanks to Professor Jeffrey Paris of the University of Manchester for judging the competition.