Home Articles 10 shape names to impress your teacher with

10 shape names to impress your teacher with

Your teacher may have heard of some of these already, but will be impressed that you know their names! How many did you know already? 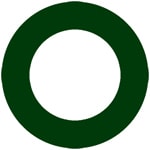 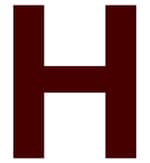 The letter H is an example of what is called a ‘balbis’.  A balbis consists of a straight line with two other straight lines joining it at right angles.  Both of the other two lines must join the middle line at its ends.  The word balbis comes from Ancient Greek and describes the two posts with a rope between them which start or finish a race.

A catenary is a special type of curve which is formed when a rope or chain is left to hang under its own weight.  Anyone studying maths at a higher level will recognise it as the graph of the hyperbolic cosine function (cosh).

A pentagram is a five pointed star which is generated by joining up alternate vertices inside a pentagon.  Can you now work out what a heptagram should look like?

A lemniscate is the mathematical name for a figure of eight shape.  The lemniscate above has become known as the symbol for infinity. 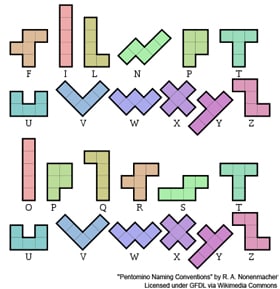 Pentominoes are formed by joining 5 squares together and there are 12 different pentominoes in total.  (This is counting pentominoes which differ only by reflection or rotation as being the same.)  The pentominoes have been named after letters of the alphabet.

It is also possible to form hexominoes and heptominoes (formed of 6 squares and 7 squares respectively), and polyominoes using even bigger numbers of squares.

A torus is the mathematical name for a doughnut shape or rubber ring shape and is hollow inside.

Imagine taking the 20 sided icosahedron below and truncating it (chopping the corners off).

The shape you are left with is called a truncated icosahedron and consists of 12 regular pentagons and 20 regular hexagons.  If you could imagine inflating this shape you would be left with what you recognise as a football!

You might always think of the planet earth as being a sphere.  In fact it is what is called an oblate spheroid, which is a sphere which has been slightly flattened along the direction of its axis.  The earth has ended up this shape due to the effect of gravity and the fact that the earth is spinning.