It’s always going to be difficult to award medals in gymnastics. Footballers fight for the most goals and sprinters push race times to their limits, but how do you rank one gymnast over another? Turns out it takes eight judges and a lengthy rulebook called the “Code of Points” defining how much each acrobatic move is worth. Olympic gymnasts used to be scored on a scale from 1.0 to 10.0, but new rules introduced in 2006 allow scores that are even higher. Bigger isn’t always better though, and the new system is disliked by many athletes and their coaches.

There are two parts to rating a gymnastic performance: difficulty and execution. A competitor might attempt a very complex sequence of moves in the hope of getting a higher score, but that increases the chance of making a mistake and having points deducted.

To reflect both sides of gymnastics, the judges are split in to two panels. In the old system, two judges in Panel A calculated the “start value” of a gymnast’s routine, a measure of the difficulty. It began at 8.8 for women and 8.4 for men, with bonus points added for particularly difficult moves up to a maximum total of 10 points.

Another six judges, panel B, deducted points for mistakes. A small mistake would only cost you 0.1 points, but falling off the equipment would lose 0.5 points. The highest and lowest scores of the six scores were ignored, and the average of the remaining four was subtracted from the starting value to give the final score. 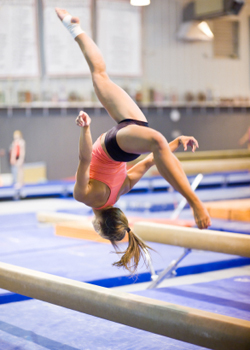 Under the old system, a 10 really did mean “perfect” – a difficult routine and a flawless performance. So why change it? The International Gymnastics Federation (FIG), the organisation in charge of the sport’s Code of Points, decided that a new scoring system would stretch gymnasts by rewarding difficult and original routines.

The new scoring system still uses eight judges split into two panels, but their jobs are slightly different. The pair on panel A now awards a score that includes the eight most difficult skills in a gymnast’s routine rated from 0.1 to 0.7 points, connections between skills worth 0.1 or 0.2 points, and 0.5 points for each of five skills the gymnasts are required to perform. These all add up to give the difficulty score. There’s no set maximum, but the top gymnasts normally achieve between 6 and 7.

Moving to panel B, the six judges are still watching for mistakes in a gymnast’s performance, but now they always subtract points from a starting total of 10. As with the old method, only the middle scores are used. A gymnast’s final score is the A score plus the B score, with most scores ranging from 14 to 17.

While the new system potentially allows for an unlimited score, in reality there is a limit on how difficult a routine can actually be. Currently that limit is a score of about 7, so a hard routine with a perfect execution will get 7 + 10 = 17. In other words, 17 is the new 10, but some gymnasts aren’t happy.

Nadia Comaneci was the first gymnast to ever score a 10, a result she achieved at the 1976 Olympics when she was just 14-years-old. She says losing the “perfect 10” damages the identity of gymnastics, leaving fans confused about what a good score actually means. The system has also been criticised for encouraging gymnasts to attempt moves that are too difficult for them, leading to an increase in sporting injuries. Who would’ve thought a simple change in the maths of gymnastics scores could cause so many problems?