Bringing land back to life

Anti-personnel landmines are one of the nastiest aspects of modern warfare. Landmines don’t discriminate between combatants and civilians, nor do they stop being dangerous after the fighting stops. Landmines can simply detonate on contact with a trigger mechanism, with seven thousand people a year being killed by landmines. Many others are maimed, blinded or injured by shrapnel.

Mines can be triggered by pressure – even the weight of a child’s foot can activate them, or by tripwires up to 20 m long. To make things harder landmines might be buried or hidden in dense foliage with thin nylon fishing line used as tripwires. One way of detecting the landmines is to look for these tripwires. But the foliage can hide the wires, while leaf-stems and other features can masquerade as tripwires. Trying to spot all the tripwires in the artificial jungle below gives an idea of how difficult this can be. 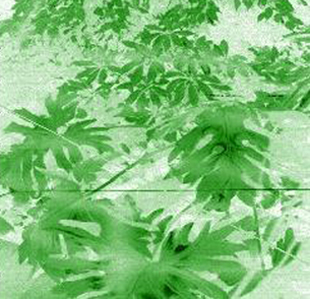 Any way of detecting these weapons must be able to quickly detect tripwires and not get confused by other straight lines. This requires a way of finding partly obscured straight lines in an image. Fortunately, just such a method exists – the Radon Transform (or its discrete versions). This Transform integrates the pixel intensity along different lines in the image. Since this technique is already widely used in image processing in medical and other research, optimisations have already been developed to increase the processing speed – finding the inverse of a Radon Transform quickly is one of the key problems of modern image processing. The image below shows the results of applying the Radon Transform to the artificial jungle. The straight lines show up as points of high intensity. 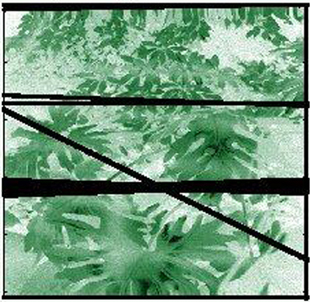 Of course real life isn’t as simple as this, and some extra work has to be done to detect tripwires. To apply the Radon Transform the image must first be pre-processed using, for example, edge detectors to enhance the edges. After the Transform has been applied, some threshold value must be imposed to avoid picking up false indicators caused by – eg branches and stalks. However, after a sequence of calibration calculations and analytic estimates with a number of different images, it is possible to derive a fast detection algorithm. This picks out the tripwires by first filtering the image, then applying the Radon Transform before discarding all values below the determined threshold. By applying the inverse Transform this gives an image like the one shown below, where the precision of the line indicates the reliability of the calculation.

Using these mathematical processes on real-time video feeds can save both soldiers and civilian mine-clearers from triggering the tripwires. In combat, this reduces casualties. After formal hostilities have stopped, humanitarian groups can then work on returning the killing fields to places where people can live safely.