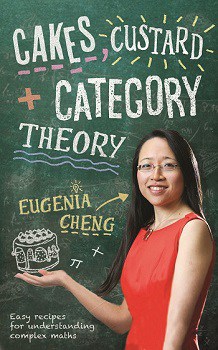 Most of Cheng’s chapters begin with a recipe, artfully designed to illustrate a point concerning culinary process or strategy which is then used to highlight a mathematical procedure or theory.  It is Cheng’s delightful descriptions of her gastronomic adventures that bring the mathematics to life.

Sometimes in cooking, recipes can be changed so much that the result is a long way from the original. Cheng describes an intriguing recipe for Olive Oil Plum Cake, which is wheat-free, sugar-free and dairy-free. She says that whilst it looks and behaves similarly to a cake, it is obviously not quite the same as a cake.  Cheng calls this a “generalisation of a cake” and goes on to discuss the analogous, important, concept in mathematics.

Near the end of the book Cheng describes Raw Chocolate Cookies that are low in fat, suitable for vegans, sugar-free, gluten-free and raw.  So very few similarities to a standard cookie recipe!  However, this leads on to an interesting discussion of sameness: how triangles with sides of different lengths but having the same angles are classed as similar, and the way that expressions such as  are similar, but not quite the same, when they refer to three bags containing four apples or four bags containing three apples.

Much of the mathematical part of the book concerns the more abstract logical side of maths.  We are told about the axioms for defining groups (the mathematical structures which help us analyse symmetry) and other exciting area of mathematics, such as topology (which regards bagels and doughnuts as essentially the same as mugs of coffee).  Cheng explains how mathematicians can make 7+7=2, how they ‘invented’ imaginary numbers, how they define certain mathematical abstractions using relationships and how they can prove something is true by showing that it cannot be false (proof by contradiction).

The culinary example provided for proof by contradiction is a demonstration that a cake can’t be made without flour or that bread can’t be made without yeast. But as Cheng points out, as flourless cakes and unleavened bread exist this is an example where things don’t quite work out as expected.  Such occurrences happen in mathematics; proof by contradiction has led to new mathematical discoveries such as elliptical and hyperbolic geometries.

Making custard is used to demonstrate the tree diagrams used in category theory.  When combining ingredients for custard (using eggs rather than custard powder) the order of the operations matters.  This is true in most areas of mathematics and can be represented diagrammatically: simpler than defining something algebraically.

Cheng seeks to dispel the myths that maths is only concerned with whether the answer is right or wrong and that it is just about numbers.  Her examples are clear and straightforward, based around everyday activities: cooking, shopping, map-reading etc. Her engaging style draws you in so you empathise with her over broken relationships, laugh when she failed to recognise the entire Arsenal team as they walked through the hotel bar she was sitting in, and admire her determination, aged 16, to learn welding in order to improve her understanding of how a car works.

But this is not just an idiosyncratic account of interesting mathematics.  Cheng touches on many issues faced in learning maths: thinking you’re stupid because you don’t understand something; feeling demoralised when you keep getting the wrong answer but don’t know why; and the importance of understanding the principle behind the process rather than simply memorising the process.  This is a fast-paced book packed with so many examples and analogies that it is easy to lose sight of where it is taking you.  But I don’t think this matters: the reader is left with the overall impression that mathematics is fun and exciting, and is no harder than making custard!

This book will inspire learners who are intrigued by mathematics but unsure whether to take it beyond A-level, and even if it doesn’t succeed in exciting you about mathematics it will certainly change the way you approach baking.

The author of this book review is Noel-Ann Bradshaw – Vice-President Communications for the Institute of Mathematics and its Applications.

This review is an abridged version of one which first appeared in the Times Higher Education magazine – click here to read the full review.