In some ways Pi (π) is a really straightforward number – calculating Pi simply involves taking any circle and dividing its circumference by its diameter.

On the other hand Pi (π) is the first number we learn about at school where we can’t write it as an exact decimal – it is a mysterious number which has digits which go on forever and has fascinated people for thousands of years.

We learn that we can start to write down Pi (π)  = 3.141592653589….. but that we can never finish it.  Pi (π) goes on forever and has no repeating pattern to its digits – it is what is called an irrational number.  In fact if you search long enough within the digits of Pi (π) you can find any number, including your birthday.

Pi (π) is also a really useful number. It appears everywhere in mathematics and also has countless uses in Engineering and Science.  Lots of things are round, and whenever something is round, Pi (π) usually becomes important.  For example if an engineer wants to calculate the volume of a water pipe they will use the following formula for a cylinder:

is the radius of the pipe and

is the height of the pipe.)

Because Pi (π) has so many important uses, then we need to be able to start to calculate it, at least to several decimal places accuracy.  Someone had to come up with the approximate value for Pi (π) which appears on your calculator – it didn’t get there by magic!

The first and most obvious way to calculate Pi (π) is to take the most perfect circle you can, and then measure its circumference and diameter to work out Pi (π).  This is what ancient civilisations would have done and it is how they would have first realised that there is a constant ratio hidden within every circle.  The problem with this method is accuracy – can you trust your tape measure to deliver Pi (π) correct to 10 or more decimal places? 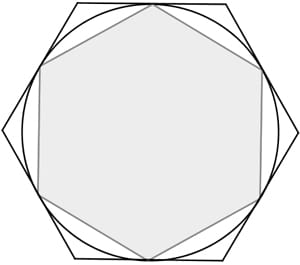 The Ancient Greek mathematician Archimedes came up with an ingenious method for calculating an approximation of Pi (π).   Archimedes began by inscribing a regular hexagon inside a circle and then circumscribing another regular hexagon outside the same circle.  He was then able to calculate the exact circumferences and diameters of the hexagons and could therefore obtain a rough approximation of Pi (π) by dividing the circumference by the diameter.

Archimedes then found a way to double the number of sides of his hexagons. He could then find a more accurate approximation of Pi (π) by using polygons with more sides, which were closer to the circle. He did this four times until he was using 96 sided polygons. Archimedes calculated the circumference and diameter exactly and therefore could approximate Pi (π) to being between

has remained as one of the most popular and memorable approximations of Pi (π) ever since.

Around 600 years after Archimedes, the Chinese mathematician Zu Chongzhi used a similar method to inscribe a regular polygon with 12,288 sides.  This produced an approximation of Pi (π) as

which is correct to six decimal places.  It was nearly 600 more years until a totally new method was devised that improved upon this approximation.

Mathematicians eventually discovered that there are in fact exact formulas for calculating Pi (π).  The only catch is that each formula requires you to do something an infinite number of times.  (Which makes sense given that the digits of Pi (π) go on forever.)  One of the amazing things which interests people about Pi (π) is that there isn’t just one formula, but a large number of different ones for people to study.

One of the most well known and beautiful ways to calculate Pi (π) is to use the Gregory-Leibniz Series:

Mathematicians have also found other more efficient series for calculating Pi (π). Computer programs can add up more and more terms, calculating Pi (π) to extraordinary degrees of accuracy. In 2014 the world record was that a computer has calculated Pi (π) correct to 13,300,000,000,000 decimal places.

Before the advent of computers it was much harder to calculate Pi (π). In the 19th Century William Shanks took 15 years to calculate Pi (π) correct to 707 decimal places. Unfortunately it was later found that he had made a mistake and was only right to 527 decimal places! The nine or 10 digits of Pi (π) which you see on your calculator have been known about probably since 1400.

The length of each word corresponds to a digit in Pi (π).