Can numbers explain the universe?

We all have numbers that are important to us. They could be your phone number, your date of birth, or the number of your house – numbers that you’ll never forget. Our important numbers are all different, but a small group of numbers are so important that they should be on everyone’s list. They’re called the physical constants of the universe, and without them you wouldn’t exist.

These mysterious numbers describe things like the speed of light, or the strength of the electromagnetic force that holds atoms and molecules together. Our fundamental theories of how the universe works rely on these numbers, but scientists have no idea where they come from. There are two types of physical constant – ones where the numerical value depends on the units you use and others where it is always the same. 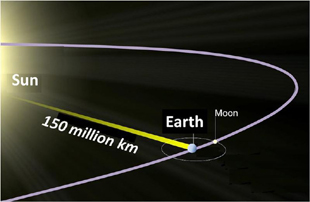 If that sounds confusing, think of a ruler. A typical ruler like the one you’d use in school is marked with both 30 centimetres and 12 inches. That’s two different numbers used to describe the same length. In the same way, we can say the speed of light is 300,000,000 metres per second, or 186,000 miles per second. No matter how you write it though, the speed of light has a fixed value that we call c. In a way c is the ruler that measures the universe, because a metre is officially defined as the distance light travels in 1/300,000,000 of a second.

You might think it’s strange that light always travels at the same speed. After all, cars and people can travel at different speeds, so why not light? In the 20th century, a physicist named Albert Einstein asked the same question. He discovered the famous equation E = mc2 which tells us we can convert between mass and energy. This is why the Sun shines – atoms of hydrogen are forced together to form helium, and the leftover mass is converted into energy.

So the speed of light is an important physical constant, even though its value changes depending on which units you use. What about those constants that don’t depend on units? One example is the fine structure constant, or alpha. This constant determines how strongly particles stick together. If alpha was different, atoms and molecules couldn’t form. In other words, your very existence depends on the value of alpha!

Scientists have done experiments showing alpha is very nearly equal to 1/137. This value is called a dimensionless number because it does not have any units. It’s not 1/137 metres per second or 1/137 miles per hour – just 1/137.

But why that number? Why not 1/136 or 1/138? Nobody knows. Physicists hope to one day have a Theory of Everything that mathematically describes the complete structure and origin of the universe. It would also explain where numbers like alpha come from because they would be the result of equations, rather than worked out from experiments. With a Theory of Everything, maths could solve the biggest problem of them all!