Close encounters of the mathematical kind

Are we alone in the universe? It’s a question that’s been asked by people all over the world as they look up at the stars and wonder if anyone is peering back. As an astronomer, Dr. Frank Drake spends more time gazing into the heavens than most, using optical and radio telescopes. In 1961 he came up with an equation to help us think about the possibility of extraterrestrial life, and founded a branch of astronomy called SETI, the Search for Extra-Terrestrial Intelligence.

The Drake equation, as it is now known, looks like this:

fp is the fraction of those stars that have orbiting planets

fc is the fraction of civilisations that have the technology to communicate across the stars.

L is the length of time a civilisation communicates for

It’s hard to place a figure on any of these variables, because we only know of one intelligent civilisation – us! We can use what we know about the solar system to come up with some estimates, but the value of N can vary widely, depending on which numbers we choose. If you’d like to try and find your own value for N, this interactive tool will let you experiment.

Of all the variables in the Drake equation, we probably have the best idea about R*. Astronomers observing changes in the Milky Way galaxy reckon that about seven new stars are born each year. Next is fp, which is a little trickier. We’ve only discovered around 400 planets outside of our solar system, which isn’t much compared to the 100 billion stars of the Milky Way! Estimates for fp range from 20 to 60%, with 50% seen as the most likely.

From here on things get a bit more uncertain. We know that in our solar system ne is at least 1, because Earth supports life. It could be more, because some scientists think other planets like Mars or Venus also have the potential to support life. A common value of ne is 2.

Just because a planet can support life, it doesn’t mean life will actually evolve, or that it will be intelligent and able to communicate. Suggested values are fl = 0.33, fi = 0.01, and fc = 0.01, but we’ve got no real evidence backing up these numbers. Likewise, we don’t know how long civilisation can communicate for. We’ve only had radio telescopes for less than a hundred years, but you would hope the human race will be around much longer than that! A common choice for L is 10,000 years. 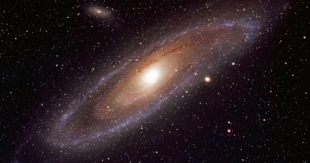 Life, the universe, and equations

The high uncertainty involved means that any value for N could be very wrong though. When multiplying estimated numbers, we have to add the percentage error, and with seven variables that percentage error soon gets quite large. Critics of the Drake equation say this makes it impossible to calculate a meaningful value for N.

In a way they’re right, but the Drake equation isn’t really designed to give us an answer about the existence of extraterrestrial life. Its real significance is in helping us ask the right questions. The terms in the equation bring together astronomy, biology, and even sociology to produce a model of life among the stars. By asking the question “are we alone in the universe?” in the language of maths, we learn more about the universe around us, and our place within it.