Home Articles Why don’t we see in X-rays?

Why don’t we see in X-rays?

We are mostly blind. The retinas at the back of our eyes can only ensnare photons from the tiniest sliver of the electromagnetic spectrum. The part we call visible light only encompasses wavelengths between 390 – 750 nanometres, whereas the whole electromagnetic spectrum spans wavelengths from the size of an atomic nucleus (gamma-rays) to sizes greater than a football pitch (radio waves). How come we, and most of the animal kingdom, have evolved to be attuned to such a tiny window? The answer lies in what light the Sun kicks out and which parts of that light our atmosphere gives free passage to.

Let’s start with the Sun. Our nearest star is close to being what is called a ‘black body radiator’. A black body is a perfect absorber and emitter of thermal radiation. Black body radiation was a problem at the turn of the 20th century because theory couldn’t explain the results coming from experiments.

When experimenters plotted the intensity of radiation coming from a body, against the wavelength of that radiation, they found a very distinct shape with a sharp rise to a peak followed by a long tail off, as in the graph below. 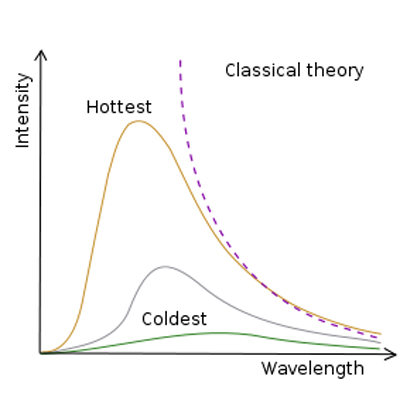 As you can see classical theory could only account for the long tail-off and not the whole shape of the curve. What was needed was a complete change of thinking. In 1900, Max Planck provided just such an intellectual sea-change. He proposed that atoms could only absorb and emit radiation in discreet bundles – called quanta. When Planck applied his insight to the equations involved, his new idea recreated the black body curve. This was the birth of quantum physics.

The equation Planck formulated was:

where: I is the intensity of the radiation; ? is the frequency; T is the temperature; h is Planck’s constant; c is the speed of light; and k is Boltzman’s constant.

Plugging in a temperature of just under 6000K for the visible surface of the Sun gives the Sun’s black body radiation curve – the grey area on the graph below. The yellow area is the actual radiation we observe arriving at the Earth from the Sun. As you can see, the Sun is an almost perfect black body radiator. 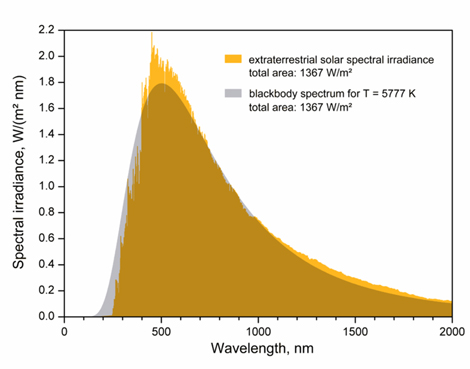 Diagram by Sch via Wikimedia Commons

So most of the light that falls onto the Earth’s atmosphere is in what we’ve called the visible part of the spectrum (390 – 750 nanometres). In fact 99% of the electromagnetic output of the Sun is in ultraviolet, visible or infra-red radiation. However, that is only half the story – to reach our eyes on the ground, the light has to journey through the atmosphere itself. What happens to most of the ultraviolet and infra-red radiation?

So why don’t we see in X-rays? Visible light is the radiation the Sun generates most prolifically. It is also the radiation that our atmosphere hinders least. It is no surprise that the majority of eyes have evolved to be sensitive to the most abundant light around. This is summed up in the graph below. The dark curve shows the ideal black body output of the Sun, the yellow shows the actual radiation from the Sun reaching the Earth and the red area shows what actually reaches us on the ground. 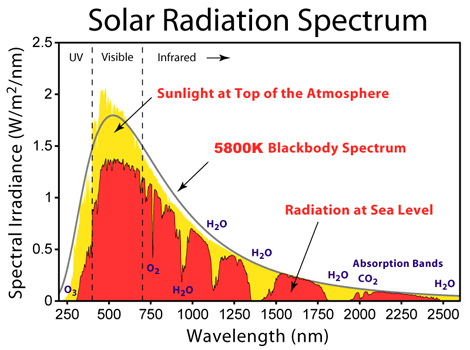 Diagram by BetacommandBot via Wikimedia Commons