Home Articles Driving faster than the speed of sound

Driving faster than the speed of sound

Britain currently holds the only supersonic land speed record, an impressive 763 mph by Thrust SSC driven by Andy Green. And now it’s time to take things even further. The Bloodhound project, led by ex-land speed record holder Richard Noble, aims to take a car up to the dizzy heights of 1000 mph – that’s 1.4 times faster than the speed of sound. These incredible speeds mean pushing materials to the max. To reach these extremes, maths is as important as wheels to the cutting-edge vehicle.

The fastest mathematician on earth

So who do you get to drive a car like this? Well, Andy Green has volunteered again. Both his training as an RAF fighter pilot and an Oxford maths graduate have helped him to prepare for his mission. It’s not as weird a combination as it might sound. He reckons his skills as a pilot developed from the mental discipline he learnt on his maths degree.

While he doesn’t use his more advanced mathematical skills when driving, he did need to do some important mental maths in Thrust SSC to figure out when to fire rockets and release braking parachutes. The new Bloodhound will go so fast that even an Oxford graduate can’t calculate the timings quickly enough, but Andy’s understanding of the forces acting on the car is helping him to give the designers great feedback. 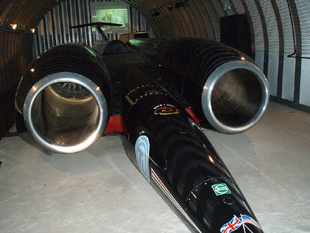 The forces are huge! In parts, the car surface will experience pressures up to 12 tons per square metre. That’s like having a large elephant come and sit on your chest! So before the designers build the car they must predict what it will have to cope with. This requires calculating how air moves around each bit of the car. This lets the team answer vital questions like ‘Will it stay on the ground’? These are what drive the design process.

Wind tunnels can’t recreate these extreme conditions, so the Bloodhound team is building an entirely virtual car! Andy explains: ‘You can have a supersonic wind tunnel giving you flow over the top of the car, but you can’t simulate the flow underneath the car, because the ground has to go past at the same speed as the wind. So now you need a supersonic conveyor belt, and that’s impossible’. Instead, the Bloodhound team has pioneered the use of mathematical computer simulations, building an entirely virtual model of the car. Some people worried about how reliable these models could be, but the Bloodhound team has demonstrated this new method is powerful and accurate.

Breaking the record won’t be possible without using mathematics. As things stand, the maths tells us that 1000mph is possible, but to know for sure we need to do it!

Visit the Bloodhound website to keep up to date on the project’s progress and learn more about what’s under the streamlined shell.