Space is closer than you think. We think of satellites like the International Space Station orbiting at far flung distances, when in fact it circles the Earth only 350 kilometres above our heads. Space itself begins just 100 kilometres up – if you could drive a ordinary car straight up, at motorway speeds, you’d be there in less than an hour.

Of course getting to space is not that simple. The main reason is gravity – the entire mass of the Earth is trying to pull you down. If you want to break free from the shackles of the Earth’s gravity, for a trip to the Moon, say, you have to exceed our planet’s “escape velocity”. Said another way your kinetic energy has to be sufficient to overcome the gravitational potential energy of the Earth. At the point you escape, your kinetic energy is equal to the Earth’s gravitational potential energy.

This can be written mathematically as:

Re-arranging the equation to find v will give the escape velocity for the Earth.

You can see that escape velocities do not depend on the mass of the thing you are trying to launch – whether it is a marble, you, or a giant rocket it is the same speed. By plugging in the numbers above you end up with an escape velocity for the Earth of 11.2 kilometres per second. 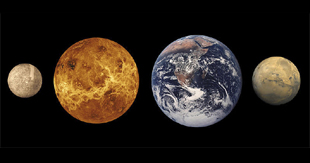 It is worth noting that if you travelled at a constant, but slower, velocity of 1 kilometre per hour, for example, you’d still leave the Earth eventually. However, gravity would act to slow you down along the way, meaning you would have to keep putting in energy in order to maintain your velocity. Launch at the escape velocity however, and, although the Earth’s gravity will still act to slow you down, you’re able to run away from the planet before it has stolen your kinetic energy completely.

So you can see that when the Apollo astronauts departed from the surface of the Moon, they only had to be travelling one fifth the speed they travelled in order to leave the Earth.

It is worth noting the difference between Mars and Ceres – the largest object in the asteroid belt – because escape velocities have a bearing on manned space exploration. US President Barack Obama has announced his intention to send Americans to an asteroid by 2025 and have them leaving footprints in the Martian surface a decade later. However, the former is much easier than the later. The trouble with human space flight, as opposed to robotic exploration, is that humans need to come home again. That means taking off from your destination at the end of the mission.

The final object in the table, 25143 Itokawa, is an asteroid. 25143 Itokawa was visited by Japanese space probe Hayabusa. Hayabusa landed on the asteroid, collected a sample and then returned back to Earth. Itokawa’s escape velocity is just 0.0002 kilometres per second, or 0.2 metres per second – slower than a spider scuttles across your floorboards.

Finally, what if there was an object that, no matter how fast you travelled, you couldn’t overcome its gravitational potential energy? That is exactly what a black hole is. A black hole is formed from the death of a massive star. For relatively small black holes, ten times the mass of the Sun is squeezed into a space just 30km across.