Game shows offer ordinary people the chance to be on TV and maybe even win some money, but when the studio lights are blazing and the presenter is waiting for your answer, you might wish you’d just stayed watching at home! Probability and statistics can help out when the pressure is on, so take a look at these TV tips.

What’s in the box?

It sounds simple. Just you and 22 boxes, each of which contains between 1p and £250,000. One of them is yours, it’s value unknown, so to work it out you’ve got to eliminate the other boxes and hopefully end up with the grand prize. Things get more complicated when the mysterious Banker steps in. After a few boxes have been eliminated, contestants receive a call from a hidden person offering them a cash payment if they agree to stop playing. But how do you know whether to say Deal or No Deal? 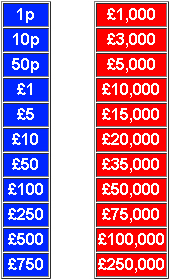 Contestants normally have all kinds of strategies to help them beat the Banker, but the only one that really works is the mathematical concept of expected value. Imagine playing a simplified version of the game, with just three boxes. One box contains £1, another £2, and the third £3. You get to pick one at random and take home the prize. To find the expected value, you multiply the amount in each box by the probability of picking it, then add all these values together. In this case, the probability of picking any box is 1/3, so the expected value is 1/3 + 2/3 + 3/3 = 2. In other words, on average you’ll win £2 playing this simplified version of the game.

There are more boxes in the real game of course, but you work out the expected value in the same way. At the start of the game, with all 22 boxes in play, the expected value is exactly £25,712.12. This number will move up or down as the game progresses, depending on which boxes are eliminated. Knocking out the top prize of £250,000 in the first round drops the expected value to £15031.74, but getting rid of the 1p box only boosts you up to £26936.50, so some boxes change the expected value more than others.

Contestants tend to build up a few questions before losing their nerve and banking, but it turns out this isn’t the best strategy. Depending on how good your general knowledge is, you should either bank as often as possible, or hold out until the end and get £1000. If your team is only answering questions correctly 60% of the time or less, it’s best to bank on £20, the first stage in the chain. On the other hand, if your team is right 90% of the time or more, you’ll increase your winnings by waiting for nine successful question so that you can bank £1000. However, it turns out that contestants in the UK only get the right answer around 58% of the time, so banking after each question seems the best way to maximise the prize.

More than a game

Keeping maths in mind could help if you ever appear on a game show, but it’s not just contestants that benefit. You might think that programmes like Deal or No Deal or The Weakest Link are just a bit of fun to liven up the afternoons, but they’re also used by economists to study people’s attitudes towards money and risk. Watching how the contestants weigh up their options and make decisions helps economists learn how people act in the real world – and probably makes them general knowledge experts as well!