Formula One is one of the world’s most high-paced sports, with drivers hurtling down the pit straight at almost 200 miles per hour in a bid to cross the finish line first. Fractions of a second can mean the difference between first and second. Such minute differences mean huge investment has been made in order to engineer a faster car. However, mathematicians trained in operational research techniques are increasingly being employed to provide the cutting edge in a different way: pit stop strategy.

It seems like common sense to think that a car that never stops is going to finish ahead of someone who is heading into the pit lane several times over a race. Yet pit stops remain a key part of Formula One. The reason is that by stopping and making changes to the car you can actually go quicker between pit stops, overcoming the time taken to make the stops in the first place. Imagine a car making three stops over the course of a race to change tyres, taking a total of 90 seconds. Your fresher tyres then get you to the chequered flag 91 seconds before you otherwise would have. Despite stopping three times, you’ve reached the finish-line one second earlier, potentially pipping your rivals to glory. 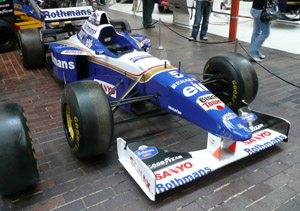 But these days Formula One is such big business, with so much resting on victory, that the decision of when to stop can no longer be left to gut instinct – the decision is based on cold, hard numbers. Operational researchers build mathematical models which can crunch data on relative track positions, fuel consumption, tyre wear and weather conditions, along with a host of other factors. These computer models can run millions of scenarios simultaneously and find the strategies most likely to succeed. They can even say how likely they are to work. This allows team bosses to understand the relative risks associated with each strategy and decide which course to take.

These scenarios are an example of the use of game theory – the area of mathematics involved in strategic decision making. It is all a juggling act involving a trading off between different factors, something computers can do much better than humans. For example, it is all well and good finding the optimum time to come in and change your tyres, but if you rejoin the track stuck behind several slower cars then you’ll have to waste time finding space to overtake them. The computer models could reveal that waiting another lap, whilst slowing you down a bit due to further tyre wear, could bring you out of the pit lane free to motor on your shiny new tyres, more than making up for the delay of the extra lap. Cue the popping of champagne on the podium.