Home Articles How fast can we go?

How fast can we go?

The runners are lined up on their starting blocks, crouched down in anticipation for the short race ahead. The starter pistol fires, and they spring in to action. Just 9.69 seconds and 100 metres later, Jamaican athlete Usain Bolt has run his way in to the record books.

Bolt’s incredible performance at the 2008 Olympics in Beijing stunned sport commentators around the world, not least because he actually slowed down towards the end of the race after it was clear he’d won. “Could he do even better?” they asked. “Yes!” said a group of Norwegian scientists, who analysed footage of the race and concluded Bolt could have achieved a time of around 9.55 seconds.

It wasn’t long before Bolt proved them right. His second record came just 15 months after his first, when he ran the 100 metres in 9.58 seconds at the Berlin 2009 World Championships in Athletics. With Bolt smashing times faster than ever before, many wondered how low the record could actually go.

There’s clearly a biological limit on how fast anyone can run, because muscles and lungs can only work so hard. Usain Bolt may be gifted with fantastic running abilities, but even he couldn’t instantly teleport across the finish line! 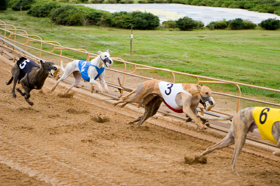 Scientists like Mark Denny, a biologist at Stanford University, have created mathematical models of running in an effort to find our speed limit. Denny looked at race times for horses, dogs, and humans from the past century or so, using statistical techniques to examine how each species has sped up over time.

He found that when it comes to animals, top speeds were reached sometime in the early 1970s and there has been little change since then. An animal’s training, diet, or genetic makeup can all influence its speed, but the first two haven’t changed much over time.

The same isn’t true for their genes. People selectively breed horses and dogs to produce great racers, so each generation has an improved body for running. Denny suggests that constant genetic refinement has already bred the fastest ever specimen from each species, but you never know – starting again with another breed might produce an even faster animal. 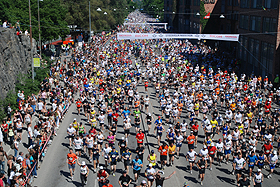 With humans, it’s a bit different. We’re not intentionally bred for speed, but advances in technology, training, and nutrition mean that race times continue to improve. Women’s speeds in shorter races like the 100 metres levelled off around the 1970s, but female marathons runners are still getting faster. In contrast, men are making progress in every length of race – due to gender differences, men are naturally faster than women.

So, just how fast could Usain Bolt run in the future? Denny predicts a limit of 9.48 seconds for the 100 metre dash, which works out a speed of 10.55 metres per second. Does that mean no human will ever run faster? Perhaps, but mathematical models aren’t perfect – they’re just tools to help us understand things. Mathematicians and scientists use models to interpret data and make predictions, then revise their models when new data comes along. Just like top athletes, they’re always trying to improve.

Maths and Sport: Countdown to the Games
‘Maths and Sport: Countdown to the Games’ is an exciting new project from the award-winning Millennium Mathematics Project at the University of Cambridge. To celebrate London 2012 they are developing free online mathematical articles and activities exploring maths and science through the Olympic and Paralympic Games, aimed at a wide audience from school students and their teachers to members of the public.