Why are people so hard to draw? We see them every day, after all, and there’s always one around to use as a model if you can find a mirror. Perhaps it’s because we see people all the time that it’s so easy to spot any little mistake in a picture. Oddly enough, familiarity can also make it harder to draw a likeness. Art teachers often say that people draw what they expect to see, what they think people look like, rather than looking at what’s really in front of them. But drawing people can be made much easier by applying the maths ideas of proportion and scale. Using fractions, proportions and a framework of basic shapes, you can draw more realistic people with very little effort.

Drawing faces starts with the head. Like every part of the human body, skulls come in different shapes and it’s recording the differences between them that will help you get a likeness. However, a good start is an ellipse or egg shape. Mark a vertical and horizontal centreline across it to give you a frame of reference for everything else.

Adding another horizontal line a quarter of the way up the egg shape will give you a guide for the end of the nose.

The lips lie half way between the end of the nose and the tip of the chin.

To find how wide the nose should be, split the widest point of the egg into roughly 5 pieces. The nose fills the width of the central fifth, with the eyes taking up the fifths to either side.

A common mistake people make is to place the eyes too high up in the face. In fact, the tops of the eyes start at the mid-point of your egg shape, and extend an eighth of the way down the face. The basic eye shape is two arcs joined together. Ears start at the eyebrows and are just as long as the nose.

These proportions will give you a neutral looking face. Use a photo in a magazine, a willing friend, or a mirror on yourself to refine the details of the features and add some personality. 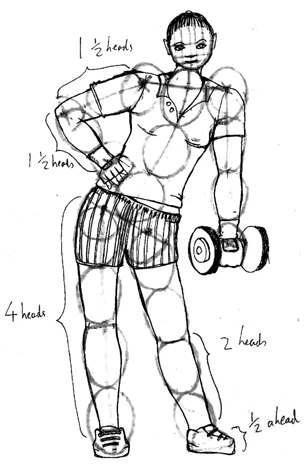 The head grows much slower than the rest of the body, so artists typically measure bodies in terms of how many ‘heads high’ they are. Children, and babies especially, have much bigger heads in proportion to their bodies than adults. A typical adult body varies between 7 and 8 heads high.

Again, start with an egg shape. Add a line down from the bottom centre of it that will follow the curve of the spine. This line should be about three times the length of the head.

Add a horizontal line here to mark where the hips and bum come: this should be twice the width of the head.

The legs come from the hip of course, and are each 4 heads long. Mark the knees in the middle.

The shoulder line is just a quarter of a head below the bottom of the head, and is three times as wide as the head itself.

Keep these proportions in mind and you can quickly whip up a figure to test out poses for a poster design, rough sizes for resistant materials, potential costume designs for a play, as well as having a good base for drawing real people. Good art and good technique comes from practice, but you can make it easier on yourself by using maths.