“Hard work”, “dedicated training”, and “a good diet” are all replies an Olympic swimmer might give when interviewed about achieving their record-breaking performance, but “computational fluid dynamics” (CFD) is unlikely to make the list. This mathematical technique deserves a mention though, as swimsuits designed using CFD are responsible for smashing swimming records around the world. The maths and engineering behind the so-called “supersuits” makes them almost too good to be true.

Moving liquids are governed by the Navier-Stokes equations, a collection of non-linear partial differential equations that are difficult to solve algebraically. The “computational” part of CFD refers to finding numerical solutions by simulating the problem on a computer. It’s a common technique, used in everything from aeroplane manufacture to food production. Swimming obviously involves a lot of fluid motion, but how does CFD help win races? 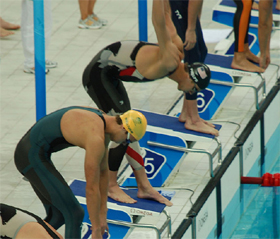 The swimsuit manufacturer Speedo spent more than three years designing their LZR Racer swimsuit, which is worn by top Olympians like Michael Phelps, and CFD informed every step of its construction. Speedo’s previous CFD research found that the drag created by water flowing over a swimmer’s body is responsible for a quarter of the resistive force they experience. Reducing drag leads to faster swim times, so with the help of scientists at NASA they analysed the drag properties of around 100 materials. The best material, a type of polyurethane dubbed LZR Pulse, produced drag test results comparable to a smooth aluminium plate – perfect for swimsuits.

Two factors contribute to drag while swimming: the flow of water over a swimmer’s skin and suit, and the turbulence caused by the shape of their body. Speedo chose to analyse the glide position, where swimmers stretch out their arms and legs to achieve a streamlined pose. It’s used immediately after the initial dive and after each kick off the edge of the pool. This amounts to around a third of a race, so reducing drag in the glide position is crucial.

Researchers for Speedo began by scanning the bodies of over 400 swimmers, creating detailed 3D models for their computer analysis. Using CFD techniques they simulated water flow over the computer models, calculating the water velocity at each point and highlighting areas where the drag forces were particularly high. Speedo’s swimsuit designers could then position the low-drag LZR Pulse material in the right place to minimise drag and compress the swimmer’s body into a more streamlined shape.

Speedo’s hard work paid off at the 2008 Beijing Olympics. At one point, 42 out of 48 swimming medals had been won by swimmers wearing the LZR Racer, and world records tumbled thanks to its unique design. With those kinds of results it was inevitable that other manufacturers would bring out their own drag-reducing suits, sparking what some journalists have called the “swimsuit wars”. Some complained that swimming was becoming less about the swimmers, and all about the suit technology.

Eventually Fédération Internationale de Natation (FINA), the international body which governs swimming and other aquatic sports, had to step in. They called in their own team of scientists to analyse the suits and determine which ones give too great an advantage. Under new rules introduced at the start of 2010, the LZR Racer and other supersuits were banned from competitions. Undeterred, Speedo and the other swimsuit manufacturers set about coming up with new suits that still provide a speed boost while staying within the rules. That’s easy for mathematicians using computational fluid dynamics – just another constraint to add to their equations in the search for a better swimsuit.