Home Articles What goes around, comes around

What goes around, comes around

Everyone knows that a boomerang comes back when you throw it, but why? The peculiar path of a boomerang is due to a combination of its shape and the way it’s thrown, making them more than just your average projectile. Boomerang competitions are held all over the world, with prizes for the longest throws, the fastest catch, and maximum time in the air. With an understanding of the aerodynamics that drive it, skilled throwers can make their boomerangs fly for hundreds of metres.

The wings of a boomerang work just like those found on an aeroplane, which have a special shape known as an aerofoil. It works by creating a difference in air pressure above and below the wing, which in turn creates a lifting force that keeps the aeroplane flying. There are many boomerang designs, but they all work according to the same principles. The traditional banana-shaped boomerang is essentially two of these aerofoil wings stuck together at an angle, but unlike those on an aeroplane, the wings face in opposite directions.

This design is important because boomerangs are always thrown vertically like a knife, not horizontally like a frisbee. The opposite-facing set-up means that each wing is always travelling forwards as the boomerang spins, producing lift in the same direction, parallel to the ground. This lift isn’t evenly distributed, however. To see why, imagine that a boomerang with radius r is moving forward with speed v and spinning with angular velocity ?.

The top wing travels at a speed of v+r? and the bottom at a slower speed of v-r?, and because faster wings produce more lift, the force on the top wing is greater than the force on the bottom. You might expect that this force imbalance would cause the boomerang to flip over, but it actually rotates around the vertical axis, creating the circular path that allows a boomerang to return.

Circles in the sky

The reason for this strange behaviour is that a boomerang acts like a gyroscope or spinning top. If you set one of these toys off and then give it a nudge, it won’t fall over. Instead, it starts to wobble from side-to-side, leaning over in a way that seems to defy gravity. This wobble is called precession, and it occurs because of the law of conservation of angular momentum, which means that if you apply a force to a spinning object at a right angle to its spinning axis, the resulting movement is at right angles to both the spinning axis and the force. 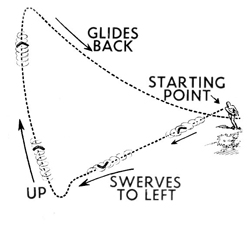 Of course, all of this assumes you’re throwing your boomerang correctly. To get a nice, circular return path, the rate of precession has to match up with the speed of the boomerang through the air. If your boomerang is moving with speed v along a circular path of radius R and precessing with an angular velocity of ?, it will only return if v = R?. Achieving this means throwing your boomerang at the right speed and with just enough spin to produce the angular velocity required, otherwise it won’t return. And you know what they call a boomerang that doesn’t come back – a stick!

Unspinning the boomerang
A Plus magazine article by Hugh Hunt.

Bang up a boomerang!
A Plus magazine article by Hugh Hunt.