The Olympic Stadium in London will play host to many different events come the 2012 Olympics. 2,000 athletes from around the globe will push their bodies to the limit as they attempt sprint, jump and throw their way to a coveted gold medal.

Two track and field events – the high jump and pole vault – require the athlete to get as far off the ground as they can to clear horizontal bars. In both cases they get a running start. However, to look at the maths behind their sport, you need to look at how high they can jump from a standing start.

Jumping on the spot

When the athlete is stationary their weight, W, is a force acting towards the ground from their centre of mass (COM). It is given by:

where m is their mass and g is acceleration due to gravity.

They generate an upwards force, F, by bending their knees and pushing against the ground. The distance their COM is lowered during this crouching is C. The upwards force varies during a jump but can be treated as impulsive, with an average force over the whole jump.

where F and ? are force and acceleration respectively.

One of the kinematic equations also says that:

where v is the take off velocity and u is the initial velocity.

If gravitational potential energy is equated to kinetic energy then it can be said that:

where h is the height of the jump.

Cancelling the mass on both sides and substituting in for v2 from [5] gives:

Moving g to the other side:

From equation [1] the denominator is actually W. So:

It is said a good athlete can generate a force equal to twice their weight (i.e. F = 2W)

Substituting this into [8] shows that:

This means the height gained during a standing jump is the same as the distance the COM is lowered during the crouch – typically 60cm. 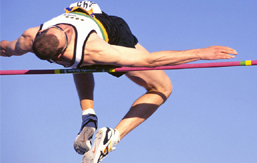 During the High Jump the athlete is not stationary: they run towards a raised horizontal bar before taking off from the ground in an attempt to clear the bar.

If all of their kinetic energy during the running stage could be converted to potential energy, by raising their centre of mass through a height, h, then:

However, we know that the athlete can get 0.6m extra height from their standing jump (the 60cm calculated above). Also, their COM is already approximately 1m above the ground.

At top speed, Olympic athletes can reach around 10 metres per second. This gives an hmax of ~ 6.7 metres. 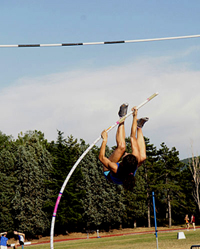 However, the current Men’s World Record, held by Cuban Javier Sotomayor, is only 2.45 metres. This is because it is impossible to convert all of their kinetic energy into potential energy.

During the Pole Vault the athlete again sprints towards a raised horizontal bar but this time uses a long pole to launch themselves into the air.

The current Men’s World Record for the Pole Vault, held by Ukrainian Sergey Bubka, is 6.14m. This is much closer to hmax because the use of the pole helps to convert most of the jumper’s kinetic energy into potential energy. Using arms muscles to bend the pole also increases the available mechanical energy.