When detectives arrive at the scene of a murder they are presented with lots of evidence, ranging from tiny unseen hairs or particles which could provide DNA, to bigger more noticeable clues such as potential murder weapons. Some of the most gruesome and obvious clues are usually bloodstains, and, by using mathematical analysis, these bloodstains can provide powerful evidence as to what happened.

It is important for detectives to try and find the exact location of an attack in order to piece together an accurate sequence of events. Investigators analyse the shape and location of bloodstains in order to work out exactly where they came from. Most blood will not drip vertically from a wound, but rather will be flicked from a knife or injury as it moves. This means that blood drops will hit the ground at an angle forming the shape of an ellipse. The shape of the drop shows the direction of travel of the blood and the shape of the ellipse helps detectives establish the size of the angle at which the drop hit the floor. This is called the angle of impact. Every ellipse has two principal measurements, the major axis (A) and the minor axis (B). 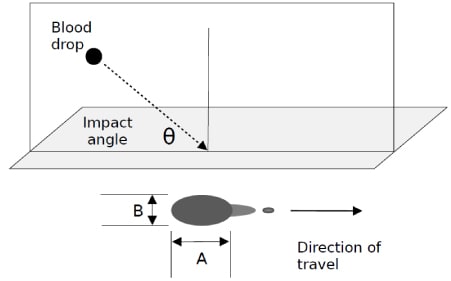 It is quite likely that there are multiple bloodstains at a crime scene, and this allows us to use basic trigonometry to find a region in space from which the blood has originated.

For example, if you had three bloodstains you can draw lines showing the horizontal directions in which the blood drops have traveled. Assuming they came from the same source, these lines will meet at a common point P. Given that we have already worked

out for each of the three bloodstains, we can then calculate the vertical distance

above the common point by using:

This finds a point above the ground from where all the drops could have originated. Investigators will, however, usually talk about a region in space, as it is too inaccurate to talk about one precise point. 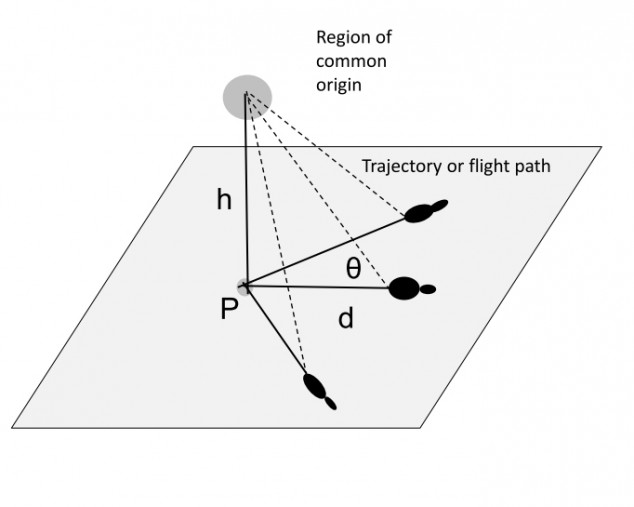 In the past investigators used to use actual string to determine the origin of the blood drops and the process is still called ‘stringing’. Using string was not as accurate as mathematically calculating the region using computer software, which is what happens nowadays.

Analysing blood stains is just one of the many ways in which mathematics can be used to help fight crime. If you want to find out more take a look at the article Crime Fighting Maths which can be found in Plus, an online maths magazine.

Article by Hazel Lewis based on a piece by Graham Divall in 50 Visions of Mathematics.