Home Articles How the tiger got its stripes

How the tiger got its stripes

The mathematics of pattern formation

You may have appreciated the beauty of a tiger, but have you ever wondered where its stripes come from?  What might surprise you is that mathematics is behind the formation of a tiger’s stripes and that its stripe pattern is even governed by a set of equations! What is even more surprising is that one of the first mathematicians to develop this theory was Alan Turing, who is better known for his work breaking the Nazi Enigma code during the Second World War.   Turing’s ground breaking theory now applies to a wide range of animals with striped and spotty coats as well as the patterns on many other natural things such as leaves and shells.

Alan Turing first became interested in the patterns on animal coats when observing Friesian dairy cows which have a distinctive black and white pattern of blotches.  These days mathematical biology is a popular and important research area, whereas Alan Turing was a pioneer in this new area of research. 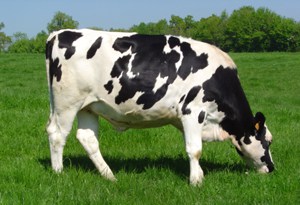 Alan Turing wondered why dairy cows have such distinctive patterns

What Turing proposed was that there are two chemicals interacting inside the embryo of an animal.  Turing didn’t know what these chemicals were, so he named them morphogens and proposed that they reacted with each other and diffused through the embryo according to a system of “reaction-diffusion equations.” One morphogen activated a stripe colour and the other morphogen inhibited the stripe colour.   As these chemicals diffused through the embryo, the stripe pattern would form.  If there were two sets of these reactions occurring then spotty patterns would form instead. If the embryo was very small when the reactions were occurring then the pattern would produce large blotches as in the Friesian dairy cow.

When Turing published his paper in 1952 called ‘The Chemical Basis of Morphogenesis’ it was a completely theoretical paper – Turing hadn’t performed any experiments on animals, it was simply an amazing mathematical theory.

What is incredible is that biologists are now starting to actually prove Turing’s theory by finding out what the mysterious morphogens are.  Researchers have looked at the ridges in the roof of a mouse’s mouth and found that they are being created using the pattern formation which Turing described. Researchers have also been able to identify the actual chemicals at work and what is even more exciting is that they believe that they may be able to use this knowledge to improve regenerative medicine in the future..