Home Articles Keeping an eye on the ball

Keeping an eye on the ball

You cannot be serious!

It’s the quarterfinals of the 2007 Dubai Tennis Championships, and Rafael Nadal steps up to serve. He expertly slams the ball to the other side of the court, where his opponent Mikhail Youzhny quickly moves to intercept. The pair rally back and forth until Youzhny appears to hit the ball outside the line, and the crowd goes wild. Nadal is sure that the point is his, but due to some clever maths the umpire rules the ball ‘in’ and Youzhny goes on to win the match.

Tennis is just one of a growing number of sports using a system called Hawk-Eye to provide computer-generated replays that can turn the tide of a game. Hawk-Eye combines geometry, physics and statistics with digital image processing to create a virtual representation of the game. Whether on the tennis court, snooker table, or football and cricket pitches, the mathematical techniques behind Hawk-Eye are the same.

These calculations are repeated for every frame of video, so that Hawk-Eye builds up a 3D trajectory of the ball’s movement. Even though the cameras used are very fast, there is a limit to how many pictures they can take per second so the exact position of the ball isn’t always known. To get round this, the system predicts where the ball will go based on its speed and position in each image. It also calculates how much the ball skids and compresses when it bounces off the ground – crucial information for an umpire faced with a tough line decision.

With a complete record of the ball’s path stored, officials can apply Hawk-Eye to a number of sporting situations. The computer is programmed with a model of the playing field and a basic understand of the rules of the game, which in tennis allows for quick confirmation of whether a ball is ‘in’ or ‘out’. At the 2007 Dubai quarterfinals, Hawk-Eye showed that Youzhny had managed to hit the ball just one millimetre inside the line – enough to give him the point, no matter how much Nadal protested. 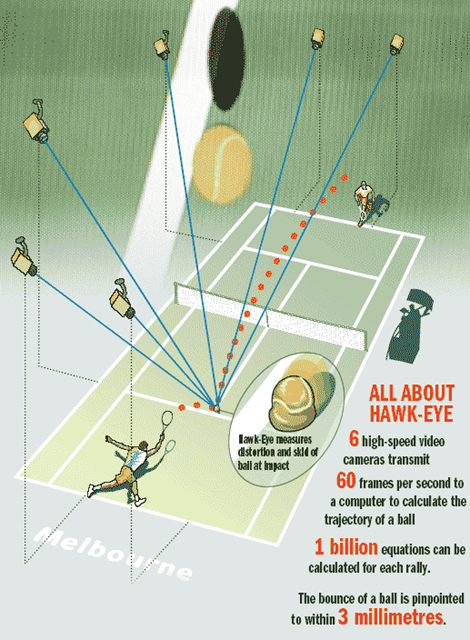 One millimetre is a very small distance though, so is it possible the computer got it wrong? Hawk-Eye Innovations, the company behind the Hawk-Eye system, says that the average error is 3.6 millimetres. This mean that, on average, the ball could be 3.6 mm away from where Hawk-Eye says it is – easily outside the line.

So was Nadal right to challenge Hawk-Eye? The International Tennis Federation realises that the system can’t be 100 per cent accurate, so approve any system with an average error under 5 mm. Hawk-Eye Innovations say that because their system is set up to be most accurate on the edge of the court lines, the average error for those really close calls is actually much smaller than 3.6 mm. In other words, it’s accurate enough for tennis. While human umpires are pretty good at calling the shots, the maths behind Hawk-Eye puts it top of the game.