Home Articles The lady with the lamp

The lady with the lamp

Florence Nightingale is best known as a nurse and for her extraordinary compassion during the Crimean war. This bloody conflict on the shores of the Black Sea killed over 350,000 young men. That’s bad enough, but over 90% died from illnesses like dysentery rather than in battle. Nightingale’s innovative use of statistics was her biggest contribution to reducing deaths.

There was little information about disease and mortality in the 1800’s as public records were a recent invention. The idea that social facts could be measured and analysed was very novel. Nightingale was a keen social reformer, and she also frequently attended scientific meetings. She had the idea that informative graphics could make her case for better hygiene more convincing. 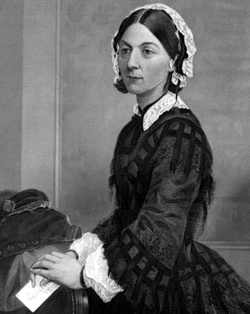 When she returned from the bloody horror of the Crimea, Florence had many ideas on how to reduce death rates in such dire situations. She drew on the mathematical education her father had given her – against her mother’s wishes. ‘What use were mathematics to a married woman’? she protested. She invented several new ways to displaying data and made good use of those that already existed. Her diagrams represented colourfully and clearly such serious matters as the numbers of deaths over a year and comparative life expectancies of civilians and soldiers. She used the graphics she produced to advocate her policies to influential parliamentarians.

Her statistical demonstrations succeeded where other approaches had failed. She convinced military authorities, Parliament and Queen Victoria to carry out her reforms. In recognition of her statistical ability, she became the first female member of the Royal Statistical Society in 1859. Her insistence on good sanitation, fresh air and public health saved thousands of lives, both for soldiers and civilians, on battlefields and in hospitals.