Home Articles In the line of fire

In the line of fire

The sky is turning red. The smoke is gathering; it’s harder to see minute by minute. Breathing becomes difficult. You weren’t prepared for this. Now you’re caught outside, the sky is darkening, and embers are spiralling from the sky. The wall of flames is getting closer, fed by flammable plants. They take advantage of this natural disaster, stoking it to the highest temperatures possible, wiping out other species. But you’re no eucalyptus; you’re a painfully vulnerable human, and your naked flesh is already complaining at the almost physical force of the heat. Where will you be safe? The fire is still advancing; you have to choose. Running downhill, you throw yourself down on the scarred, scrubby grass. Gulping greedy lungfuls of the fresher air here, you pray what the experts told you was right. 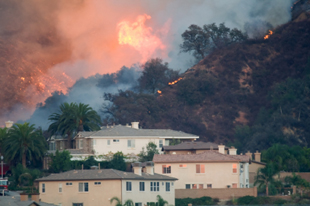 Brushfires are a natural and essential part of many ecosystems, but they have become much more common and serious as the human population has risen. Most rural communities are prepared for brushfires and can take shelter in fire-proofed houses. However, suburban areas have sprawled into the bush and people who are unlucky enough to be caught in the open are particularly at risk. Brush firefighters use their experience of forest fires and, increasingly, mathematical simulations, models and studies, to figure out how to protect humans and animals from the inferno.

Like all fires, brushfires need oxygen and fuel. As the initial fire heats up the surrounding vegetation, the moisture within it is driven out. As it gets hotter still, the complex carbohydrates that make up the plants’ structures start to break down in a process called pyrolysis. They become highly flammable gas, and it’s this that burns. But not all vegetation is created equal. In the wild environment many different plants grow together; some are more or less flammable. Some have adapted to take advantage of fires, and actually feed them to wipe out their competition. Even if only one type of plant is common, different parts of it pyrolyse at different rates, with the outside before the inside and the top before the bottom.

To get an idea of a fire’s intensity from the energy released by the burning vegetation, mathematicians take a weighted integral of the rate at which the fire advances, from a time into the past up to the present moment. The weighting is given by the different contributions of different vegetation. According to this, you’d be safe on cropped grass because it can’t get hot enough to dry out, and if it did it releases very little gas.

As well as fuel, fires need oxygen. Modelling the effect of varying oxygen supply brings in fluid mechanics and combustion effects, and requires a knowledge of wind conditions and the local countryside. In an ideal situation, fires travel uphill, with the flames leaning forward, so you’ve done well heading for low ground. But consider: even on a still day, the gases released by pyrolysis are hotter than a domestic oven, giving them a lot of kinetic energy. As they expand into the cooler, lower pressure air outside the fire they accelerate upwards, and cool air is sucked in at a massive rate to fill the gap. Burning one kg of plant matter sucks around 200 cubic metres of air into the flame. This suction brings in dynamic effects to the firefront: if a patch burns quicker than the rest, it will be out on its own and the inflow of fresh air drops, slowing down combustion so it falls back into line. Conversely, regions moving slower experience a greater suction and flare up. This sort of non-steady effect makes the difference between an idealised model of a fire, and one that can be relied upon in the real world.

The turbulence of hot gases and flame over the fire pulls up burning embers from the ground, which can be thrown out again to seed other fires. Simple models of the circulation of gas in the plume above the firefront suggest that if the plume attains a critical angle the embers will keep going round and not escape. But if oscillations in the fireline are allowed for, embers are much more likely to escape, even past the critical angle. You could end up trapped in a circle of brushfires. 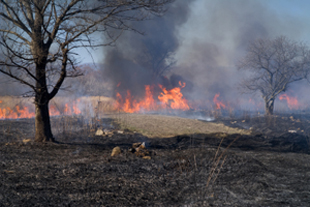 Worse, non-steady fires can behave in a way which is almost resonant: small changes in windspeed can cause large changes in the intensity of fires, which firefighters may not be prepared for. Some researchers have also suggested that non-steady situations can mean that not all the flammable gas burns due to a lack of oxygen. When these dangerous hydrocarbons build up, they can escape suddenly. A tongue of fire moving faster than a cheetah erupts over the landscape, able to cross firebreaks and cropped vegetation because it carries its own fuel with it. Maybe you’re not so safe in that bald spot after all.

Most existing models for the spread of wild?res assume that ?res spreads in a quasi-steady manner, with a rate of spread that is fully determined under any given conditions of wind, vegetation and topography. Unfortunately, real-life observations of brush fires show that nature likes to throw up non-steady situations, which can catch firefighters and environmental planners out if they are only familiar with the simplified models. Mathematicians are working on stepping up dynamic models so that they can tell us more about the real-life behaviour of the most dangerous, unpredictable fires. They hope this natural occurrence can be managed to allow both the ecosystems which depend on it, and puny non-heat-resistant humans, to flourish.