Snapping a picture has never been easier, thanks to the popularity of digital cameras and camera phones. They’re great for letting you point-and-click without worrying about light-levels or being in focus. Professional photographers and enthusiastic amateurs need to have absolute control over their images though, so use a special type of camera called a single-lens reflex or SLR. 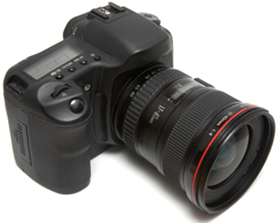 Like all cameras, an SLR is basically a box with a lens at one end and a light-sensitive substance at the other. In the past, cameras contained photographic film but now most modern digital cameras have a special sensor called a CCD that uses some clever maths. It’s not just the camera that’s doing calculations though, as photographers have to understand ratios and sequences to get the best results.

An SLR camera contains more complex mechanisms than a regular camera, allowing photographers to take great pictures in any conditions, but they can be harder to use. It all comes down to picking 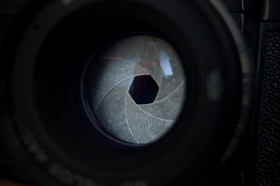 the right numbers for shutter speed and lens aperture.

These values form a sequence where each number is twice as large as the previous one, although photographers cheat a bit to make the numbers easier. Look at the jump from 1/125 to 1/60. Multiplying 1/125 by two gives you 2/125, a fraction that can’t be simplified. Using 1/60 instead gives roughly the same value and keeps all the numerators as 1. You’ll find an actual camera drops the 1 altogether, leaving just the denominator; 1000, 500, 250 and so on. Photographers use this sequence because it leads to an easy to remember rule: every time you reduce the shutter speed by one step, you double the amount of light entering the camera.

Shutter speed isn’t the only factor affecting exposure though. The shutter covers a hole called the aperture which can be varied in size. The bigger the aperture, the more light is let in, and more light means a greater exposure. The aperture also affects depth of field, or how much of a photo is in focus. A smaller aperture focuses the whole image, but a larger aperture blurs the background while keeping the foreground sharp.

Looking at the numbers, it’s hard to work out what the sequence is. That’s because instead of multiplying by 2, you have to multiply by ?2. As with shutter speeds the numbers are simplified a bit to make them easier to remember, but why use a difficult ratio like ?2? It’s all to do with area. The area of a circle is ?r2, and the amount of light let through the aperture depends on its area. If we want to halve the light entering the camera, we have to halve the aperture’s area. It’s no good dividing the radius of the aperture by 2, because that gives ?(r/2)2 = (?r2)/4, a quarter of the original area. Instead we use r/?2 to get ?(r/?2)2 = (?r2)/2, which is where we get ?2 from. 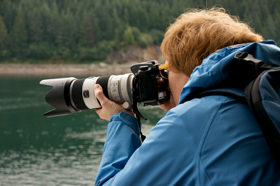 It’s key that both settings adjust the light entering the camera by the same amount, as it means photographers can trade off aperture for shutter speed. Suppose you take a picture with an f-stop of f/4 and a shutter speed of 1/60, and it comes out blurry because your subject moved. You could increase the shutter speed one step to 1/125 to compensate, but to keep the exposure constant you’d have to reduce the f-stop to f/2.8.

Adjusting camera settings isn’t an exact science though. Photographers don’t necessarily sit there with a pen and paper working out the perfect shutter speed or f-stop – they might miss a great snapshot if they did! They get a feel for the correct settings by practising and taking lots of pictures, but knowledge of the underlying mathematical relationship can mean the difference between a dark, blurry mess and the perfect photo.