You may not think it, but golf is all just physics and maths. People spend thousands of pounds on clubs and other finely engineered equipment in an effort to improve their score, but without knowing the mechanics behind the game they’ll never get that hole-in-one. We can use maths to understand every aspect of golf, from the swing of a club to the flight of a ball.

The simplest model of a golfer’s swing is the double pendulum, two rods joined together with a mass at the end. This model treats the golfer’s arms as a one rod and the golf club as another, with a hinge at the wrists. The arms rotate around a point somewhere between the shoulders, while the club rotates around the wrist joints. This model doesn’t capture the exact nuance of a golfer’s swing because it ignores factors like body rotation or the club bending, but it’s a good approximation of the basic movements.

Deriving the equations of motion for even a simple model like this can be very difficult because of all the forces involved. With the golfer’s arm muscles, the grip of their wrists, and even gravity to take in to account, using Newton’s laws to set “F” equal to “ma” is quite a challenge. That’s why many complicated problems in mechanics use an alternative to Newton called Lagrangian mechanics.

Instead of focusing on forces Lagrangian mechanics uses the difference between kinetic and potential energy to produce the equations of a model. The idea is to find a value called the Lagrangian, a function which takes the form

where T is the kinetic energy and V is the potential energy. You can then differentiate the Lagrangian function to find the equations of motion – see Mathworld for more details. In the double pendulum model, the Lagrangian function is based on the two angles in the system: the angle of the arms relative to the golfer’s body, and the angle of the club relative to the arms.

With the equations in place, it’s possible to analyse how changing these angles will alter the swing. It turns out that keeping your wrists fixed, or cocked, until the bottom of the swing increases the club velocity and makes for a better shot. Uncocking at the right moment lets the golf club swing outwards due to centrifugal force, and the best golfers can delay uncocking to increase the centrifugal force and get a stronger hit.

The moment of impact 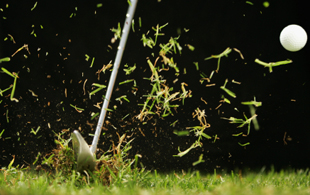 A fast swing transfers kinetic energy from the clubhead to the golf ball with forces of up to 10 kilonewtons. The amount of energy transferred depends on the coefficient of restitution, a value between 0 and 1 calculated by dividing the relative speeds of two objects before and after collision. A coefficient of 0 means all the energy is lost and the objects remain stationary, while a coefficient of 1 means no kinetic energy is lost during the collusion – though that’s actually impossible to achieve, because some energy is always lost as heat and sound.

Golfers obviously want to transfer as much energy as possible, so they use golf balls with a high coefficient of restitution. The impact of their clubhead compresses the ball before it springs back and flies in to the air. Greater compression means more energy loss and a lower coefficient of restitution, ultimately resulting in a shorter drive. Golf ball designers can measure the forces involved and model the effects of different materials to produce the best possible balls. 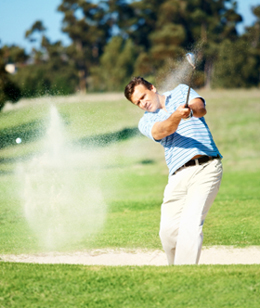 Materials aren’t the only factor to influence a golf ball’s flight. All spheres spinning through the air are subject to the Magnus effect, a phenomenon which causes air on one side of the sphere to move slower than the other. This causes a pressure imbalance, resulting in a lifting force similar to that of an aeroplane wing. Golf balls are covered in hundreds of little dimples that interrupt the flow of air and increase the Magnus effect to keep the ball in the air for longer.

In the past, the pattern of dimples on a golf ball were designed by trial and error. Ball manufacturers might accidentally stumble across a new performance-boosting configuration, but there was no way to find the best dimple pattern. More recently, engineers have used supercomputers programmed with aerodynamic equations to try out hundreds of possibilities in the search for the ultimate golf ball.

More than par for the course

The worldwide golf industry is worth around £40 billion, and with a continuous need for innovative coaching techniques and new equipment designs there’s always demand for mathematicians to model the game of golf and come up with improvements. Even the best equipment won’t turn you in to an expert golfer though, which is why even a simple understanding of the double pendulum model can improve your game. Whether it’s on the course or in product development, golfers can always use a bit of maths.