Home Articles The price is right

The price is right

It’s the aim of every business to maximise profit, but figuring out how to do so can be difficult. The laws of supply and demand tell us that people are more likely to buy products when they are cheap, meaning you might sell ten products at £10 but only five products at £20. In either case you make £100, but by lowering the price you lose out on the extra money that five of those customers were willing to spend. Selling five products at £10 and five at £20 would net you £150, but how can you be sure to sell someone a product at the maximum price they will pay? The answer: yield management, also known as revenue management.

Selling to the max 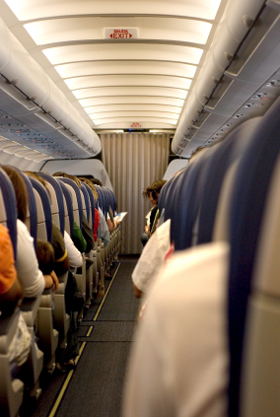 The airline industry was the first to practice yield management, when in the 1970s they realised that selling a few tickets early at a discounted rate could fill up seats that might otherwise not have sold. In order to do this airlines need to know how many seats to sell at a discount and how many to hold for higher paying customers. Getting this right is a fine balance: offer too many bargains and you miss out on revenue from higher earners, but don’t sell enough and you’ll still have empty seats when the plane takes off.

The key to yield management is estimating how many customers are willing to buy at each price. Customers have a maximum price that they are willing to pay, known as the reserve price, which for an aeroplane seat is determined by the time left before the flight and the passenger’s reason for travelling. To successfully maximise their profits airlines need to work out the distribution of reserve prices for their potential customers and thus avoid losing potential revenue by selling a ticket for less than a customer was willing to pay. Knowing the reserve price distribution lets airlines set the number of seats they offer at lower prices while ensuring there are still enough to satisfy demand from higher-paying customers.

Airlines estimate the reserve price distribution by analysing previous sales data, looking for trends such as less popular days for flying or certain time periods where foreign holidays are more popular. Just knowing the distribution is not enough to maximise revenue though, because it’s possible that the total demand will be higher than the number of seats on the plane, so airlines also use optimisation techniques.

We can illustrate the problem with a simplified example, in which an airline wants to sell two types of tickets: xl low-cost tickets at a price of pl and xh high-cost tickets for ph. Maximising revenue means maximising the equation

by optimising the decision variables xl and xh, subject to a few constraints:

– We can’t sell more tickets than C, the number of seats on the plane (though some airlines do – see below), so xl + xh ? C.

Problems like this one are usually solved using linear programming, a technique for solving linear inequalities, and for this simple example we can illustrate the solution with a diagram. It shows that we should first satisfy demand for the high-cost seats, and then fill up the remaining seats at the lower cost. 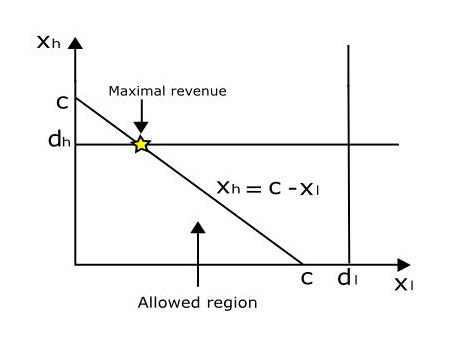 Selling the maximum number of high-cost tickets possible is an obvious strategy, but in reality airlines don’t actually know the demands dl and dh because they are random. Airlines predict this random demand using a more advanced version of linear programming called integer programming, which examines each seat in turn and decides what price to sell it at. For a plane with 100 seats and two fare classes this means optimising 200 decision variables, and the problem becomes increasingly complex as you add seats and fare types.

Modern airline yield management systems actually use around ten different fares just for economy class seats, varying prices according to the timing of the flight and the flexibility of the conditions attached to it, and the high number of variables mean the airlines need a lot of computing power. The problem is also further complicated by introducing factors such as overbooking – airlines know that people don’t always make it to the airport to take their flight, so by estimating the probability of a passenger not turning up they can sell slightly more tickets than there are seats on the plane.

Airlines were the first to discover the benefits of yield management, but other industries have since applied the same techniques in an attempt to increase their revenue, boosting profits on items such as hotel rooms or rental cars. In fact, any company selling a limited number of identical and time-sensitive products can benefit from yield management, so mathematicians with the skills to implement these kinds of systems are in great demand. For more information, why not visit the website of the Operational Research Society?

This article was adapted from material on the Plus Magazine website.