We often think of plastic surgery as nothing more than celebrities getting nose jobs and facelifts, but plastic surgeons also perform reconstructive surgery to treat patients with severe injuries or burns. The “plastic” of plastic surgery actually comes from the Greek word for moulding or shaping, and has nothing to do with the material plastic – these specialised surgeons use their skills to restore the body to its proper shape.

A common reconstructive procedure is the skin graft, in which the surgeon takes healthy skin from one part of the body and uses it to heal a damaged area elsewhere. It’s a complicated operation that can result in further health problems if the skin fails to heal, but recent mathematical research could help boost success rates.

Plastic surgeons perform skin grafts by identifying a region of healthy skin and carefully removing it along with with key arteries and veins to create a surgical flap. It’s important that surgeons preserve the flow of blood to the surgical flap so that oxygen continues to reach the tissue, but there is currently no clear way of identifying whether this will be possible before operating, so deciding the size and location of the surgical flap is often a case of trial-and-error.

Surgical experience suggests that blood vessels at least 1.5 mm in diameter are needed to sustain the required blood flow, otherwise some or all of the flap will be lost. Now, a team of mathematicians and surgeons in the US have attempted to find a more definitive answer by modelling the problem with a set of differential equations.

The dense network of veins and arteries that transport blood through our bodies are too complicated to realisticly simulate on a computer. Instead, the team took a simpler approach, ignoring the actual geometry of the vascular system and treating blood as a fluid flowing through a porous medium consisting of a mixture of tissue cells and blood vessels.

Their model uses five differential equations in total. Two describe how the changing blood pressures in the arteries and veins are related to the permeability of the surrounding tissue, while the other three describe the complicated relationships of the oxygen concentration levels in cells, arteries and veins. These equations are impossible to solve directly so problems such as these are normally solved numerically using mathematical software packages, creating a simulation of the problem. 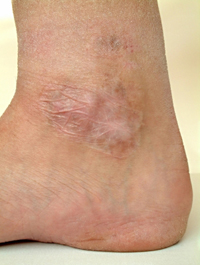 This model of blood flow within surgical flaps makes a number of reasonable assumptions and gives a fairly basic picture of the problems that plastic surgeons can face during an operation, but it could eventually make reconstructive surgery a much easier and safer process. The researchers hope to provide a software package that combines their model with medical imaging techniques for mapping the distribution of blood vessels in a piece of tissue, allowing surgeons to judge the best place to make an incision and the likelihood of a successful operation.