Home Articles The mathematics of football

The mathematics of football

You might think football and mathematics have nothing in common. Prepare to be surprised by five links between mathematics and the beautiful game.

A lot of research has been done into what makes the perfect football. Applied mathematics research has shown that the smoothness of a football affects the spin and speed of its flight. In 2006 the traditional 32 panel football was radically modified to have fewer panels which caused the ball to have less spin and to move much faster. To overcome this, researchers added pimples onto the ball to create less drag. The design of the football continues to evolve based on mathematics and physics research and now has even fewer panels than in 2006.

To read a full length article on this topic in Plus Magazine click here.

How to win at penalties using statistics

Football statistics appear everywhere, but could you actually win at penalties using statistics? Researchers from the University of Amsterdam have studied World Cup Penalty shoot outs and found that statistically goalkeepers are twice as likely to dive to the right when their team is behind. (Psychologically there seems to be some reason that people have a bias to the right when under pressure.) Penalty takers on the other hand were shown to shoot to the left or right in equal measure. If you were England manager then this kind of statistic might just help you!

To read the original abstract of the research paper click here.

Optimal angle for a throw in 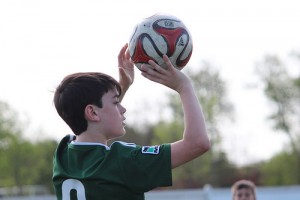 Researchers at Brunel University have shown that the angle which will maximise the distance of a throw in is around 30 degrees. Anyone learning mechanics at A-level will know that 45 degrees is the usual angle which will maximise the distance that a projectile travels when launched at a certain speed. The researchers have however shown that footballers can usually throw at higher speeds from lower angles meaning that the best angle is around 30 degrees, not 45 degrees as you might have thought.

In professional football referees use what is called the diagonal system of control (DSC). This is where two assistant referees move up and down diagonally opposite touchlines and the referee moves in a diagonal movement Southeast to Northwest. This formation has been chosen to maximise the amount of the pitch which is in the sight of the referees. If the referee just ran up and down the centre of the pitch then there would be parts of the pitch which weren’t covered as well, whereas geometrically this formation covers the pitch much more efficiently. 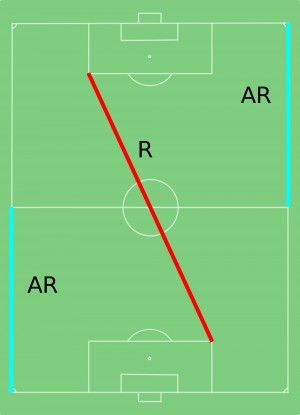 There is no doubt that a successful football manager needs mathematics in order to do well. Football is big business and managers can only pick their dream team by carefully balancing a multi-million pound budget; deciding whether to pick a few expensive players or build a more well rounded team.

Managers not only need to have a sound financial head on them, they also need to pay attention to the finer mathematical detail as Manchester City’s Manuel Pellegrini found out in 2013 when he incorrectly calculated goal difference in a Champions League match against Bayern Munich.

Manchester City had previously lost at home 1-3 and Pellegrini then told his team that they needed a 5-2 away win. When the score was 3-2, Manchester City then incorrectly believed they needed to score an extra two goals to win, when in fact they only needed one more goal to win 4-2.

Pellegrini had forgotten to calculate using the away goals rule where away goals count double if there is a draw on aggregate goals. If Pellegrini had done his maths right then maybe Manchester City would have pushed that bit harder to get one more goal and win.

10 ideas for maths jobs in football

If you are good at maths and also love football then maybe you could choose a career combining your two passions.

3. Engineer or architect – designing or checking the safety of a stadium.

5. Biomechanics researcher – looking at the science of football and how players can play at their best.

6. Statistician – football is now full of statistics and you could be needed by a broadcaster or the club itself to help fans understand as much as they can about the game.

7. Bookmaker – statisticians determine football odds so that overall the bookmaker will win and the gamblers will lose money in the long run.

8. Financial adviser – footballers are now some of the best paid people in the country and will need professionals to help them manage their money.

9. Broadcast expert – there are lots of technical roles which ensure your favourite match is broadcast correctly each week.

10. Footballer – while some footballers don’t think about maths much when playing, there are also those who use it to their advantage. We will leave you with a final quote from Dennis Bergkamp (Arsenal 1995-2006):