Going out for a meal’s a treat. You’ve enjoyed some good food and someone else is going to wash up – but then comes the bill and the embarrassment of figuring out how much to tip. Some simple maths tricks can help you finish your night out with a nice mint chocolate rather than embarrassment and getting tied up with sums.

Different cultures and different establishments vary in their attitude to tipping. But in most British restaurants and cafes, waiting staff don’t get paid very much. Owners justify this by pointing out the extra income that comes from tips, a bit of extra money left as a recognition of good service.

It’s not obligatory to tip, particularly if the bill is very small, and many waitresses and waiters will understand if young people don’t. They normally don’t have a lot of money themselves. If you’ve asked for extras, though – maybe getting the bacon taken out of a salad, or having starters brought at the same time – it’s nice to acknowledge the extra effort. Most staff interpret not getting a tip, or at least a thank you, as a way of saying their work could be improved. 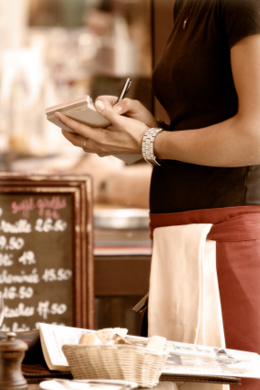 A good rule of thumb is to tip about 15% of the total bill. You can work this out easily using some mental maths.

Follow these simple steps to work out 15% of any total!

Forking over the cash

Now for the final stage: how to pay? A handful of coppers is just as awkward for the server to carry as it is for you to lug around in your wallet, and they’ll probably go straight in the charity box. You might want to round down and leave less rather than donating a pile of scrap metal.

Remember: most servers will be grateful for anything you can give, but if you want to be sure not to give offence, divide by ten, divide that by two, and add them up! Smiles all round.