The Ishango Bone. Image courtesy the Science Museum in Brussels.

Un plus un égale deux. Eins plus eins gleich zwei. Ichi tasu ichi wa ni. It doesn’t matter whether you’re speaking French, German or even Japanese – everyone agrees that 1 + 1 = 2. But why? Have people always used the same kinds of numbers? How long has maths even been around? Read on to find out why maths is the same in every language.

We don’t know exactly when maths began, but it certainly pre-dates any of the languages we speak today. One of the earliest mathematical objects that we know about is the Ishango bone, thought to be more than 20,000 years old.

It’s covered in three columns of lines arranged in a pattern that archaeologists believe represent different numbers. One column seems to record the prime numbers 11, 13, 17 and 19, while another could show an understanding of multiplication and division. On the other hand, the bone could just be a tool for marking the passage of time – counting, but not maths. 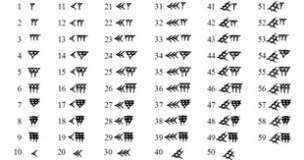 Some of the first real mathematicians were the Babylonians, an ancient civilisation that lived around 2000 BC in what we now we call Iraq. The Babylonians didn’t have paper or pencils so instead made marks on clay tablets, some of which still survive today. Their number system looks very different to ours, and they counted in lots of 60 instead of lots of 10, but they could still do addition and multiplication just like you do at school.

The Babylonians weren’t the only ones with their own number system – you probably already know about Roman numerals, the I’s, V’s and X’s sometimes found on old clocks and buildings. The ancient Greeks and Egyptians also had similar systems. So if people used to have all these different number systems, how did we end up with the 1, 2, 3 system that we have now?

Our modern numbers are often called Arabic numerals because they were brought to Europe in the 13th century by an Italian mathematician called Fibonacci who had studied with Arab mathematicians. At the time Europeans were still using Roman numerals, but these were difficult to work with when multiplying and dividing, so merchants and bankers eventually embraced the much simpler Arabic system.

Europe had actually taken a long time to catch up, because the “Arabic” numerals were actually first invented in India, during the 3rd century BC! This ancient number system wasn’t quite the same as the one we use today because it didn’t include the number zero, but it was added later in the 9th century AD. And when mathematicians discovered the idea of “nothing”, they found they could start thinking about everything.

The Arabic number system eventually spread across the globe, which is why you’ll still see familiar numbers even in far-off foreign countries, but it’s not the numbers themselves which are important – it’s what you do with them. The early Babylonian and Roman number systems were designed for simple everyday tasks like trading and measuring, but the inclusion of zero meant Arabic numerals could do so much more.

Zero led to the discovery of calculus, a powerful mathematical tool that we used to understand everything from foxes hunting rabbits to building skate parks, and from there mathematicians came up with even more advanced techniques. These days maths is studied all around the world, with mathematicians from many different countries working together to solve problems, and although they might not share the same spoken language, they can still communicate and share their ideas through the universal language of mathematics.

This article is based on a suggestion by Katie Reardon at St Georges College, Surrey, who won the Articles Competition (14-16 age group).