Home Articles What’s the largest number in the world?

What’s the largest number in the world?

If you’ve ever asked what the largest number is during a maths lesson it is quite likely that some bright spark piped up with an answer along the lines of: “That’s easy! It’s infinity of course!”

The only problem with infinity is that it isn’t a number as such, as demonstrated by the conversation below between two bright sparks.

Bright spark one:  “Infinity is the biggest number in the world, that’s easy!”

Bright spark two: “Well I’ve got a bigger number for you – infinity plus one!”

Bright spark one again: “I’ve got a number to beat yours – infinity plus one, times a million!”

Conversation goes on like this for what seems like an infinite amount of time until neither bright spark has arrived at the world’s biggest number.

The infinity of the counting numbers

is used to label this set and it stands for ‘natural numbers’.

is also infinite in size, but appears to contain one less number than

. Are they the same size?

We can show that

and the elements of

Up till now we would have said that the size of

was simply infinity, which is written like a number eight on its side:

However we are about to find out that there are different sizes of infinity, and so we now label the size of

which is pronounced as ‘aleph zero’.

is the smallest size of infinity, and our set

Other sets which have the size

. These include the set of positive even whole numbers, and also what is known as the set of rational numbers. Rational numbers are all the numbers which can be written as fractions. If a set of numbers has the size

it is said to be countable.

We can write down every possible fraction into a table like the one below. Equivalent fractions might appear more than once, for example

however we can easily remove any repeats from the table. We can then draw on a diagonal pattern which will allow us to put our fractions into a list. We are now left with a neat list of fractions

If we have a list of fractions they can be counted and the rational numbers are therefore said to be countable. 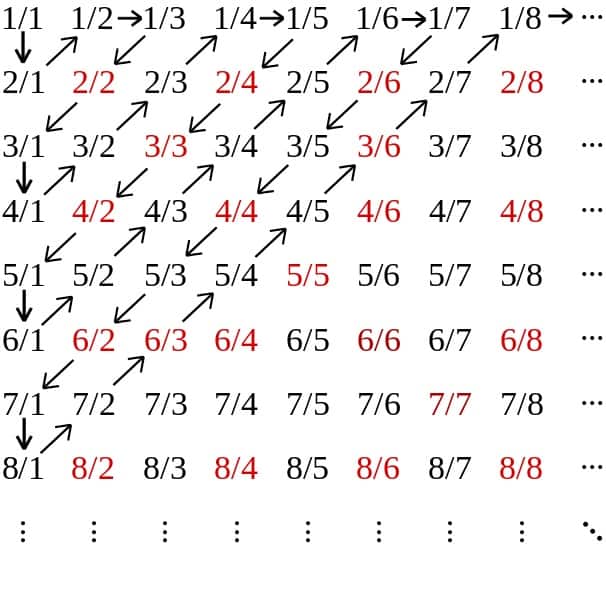 Not every number can be written as a fraction. Numbers that can’t be written as fractions are called irrational numbers. Well known examples include

and surds such as

as an approximation for

Let’s now look at the set of all numbers which are between 0 and 1. This set will include rational numbers such as

as well as irrational numbers such as

This set of numbers is clearly infinite in size, as we can always think of more and more numbers which are contained in the interval (0,1).

In 1873 a German mathematician called Georg Cantor invented a very clever proof that the set of all real numbers in the interval (0,1) has a size which is a bigger infinity than the size of the set of the natural numbers

Let’s assume that the size of the set of all real numbers in the interval (0,1) is the same size as

. We could then make a list attempting to count up through the real numbers between 0 and 1. It could look something like this if we weren’t being very logical:

Cantor’s really clever next step was to construct a new number which isn’t on the list. Cantor’s argument will work either if we use a list like the one above, or even if we painstakingly tried to make a logical list which attempted to capture every number between 0 and 1:

Cantor’s clever way of choosing a number not on the list.

In conclusion, the answer to the question of what is the largest number in the world is not straightforward.  In a nutshell, there is no largest number, you can keep counting forever.  But you can also find two groups of numbers – both infinite in size, but also different in size to each other.  It is really incredible to think about!

This article has only begun to scratch the surface of this fascinating and mind-boggling topic.  If you want to read further, try ‘The Continuum Hypothesis’ in Plus Magazine.  If you choose to study mathematics at degree level, you will have the chance to study what is known as set theory, covering in more detail the topics discussed in this article.