Home Articles The zombies are coming

The zombies are coming

Many films have lovingly and bloodily depicted what happens when the dead rise from their graves to feed off the living. Surprisingly few scientists have tackled this potentially crucial question, but maths is capable of taking it on. Zombie infestations have a lot in common with other infectious diseases – if you disregard the stumbling around and the desire for brains. 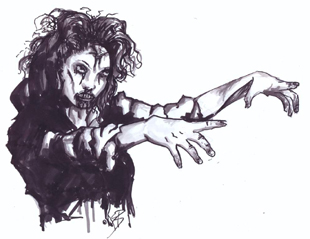 Zombies infect others by biting and close contact. In some scenarios, those infected are doomed to become zombies themselves; in others, they can be ‘cured’. Zombies can be disabled by removing their head or destroying their brain. An incubation period adds further realism and all-important dramatic tension.

Combining these well-established facts with the maths they usually use to study the spread of diseases, Canadian researchers assembled a set of equations describing a basic zombie set-up with no treatment. The numbers showed that such a situation is only stable when there are no zombies – or no humans. They proved what every horror film fan knows: human-zombie coexistence is impossible.

Relating these equations to each other, and plotting how they changed with time, let the researchers check out the future for both situations. Upsettingly, there are no acceptable solutions to the mathematical description of the no-zombie situation. This indicates that the situation with no humans infected cannot last. Realistic, positive solutions only exist for the Doomsday scenario where no humans are left.

So what can the human race do to fight back? Introducing quarantine for infected or zombified individuals is one option. However, it’s unlikely that sufficient quarantine resources will be available to get rid of the outbreak. If the zombie reproduction rate cannot be reduced this way, the human race is still doomed, just a bit more slowly.

Of course another possibility is a cure. This would change things significantly. The linked equations for this situation have a satisfactory solution. Here, a small population of humans survives in the zombies’ world.

Without a cure, brute force can always be used. Assuming we are not prepared, it looks like many repeated attacks are the most practical option. If the limited intelligence of most movie zombies and the resourcefulness of humans depicted in films is realistic, we could expect to wipe out more zombies with each wave.

The researchers conclude that ‘an outbreak of zombies infecting humans is likely to be disastrous, unless extremely aggressive tactics are used against the undead. While aggressive quarantine may eradicate the infection, this is unlikely to happen in practice. A cure would only result in some humans surviving the outbreak. Only sufficiently frequent attacks, with increasing force, will result in eradication, assuming the available resources can be mustered in time’.

The dead coming back to life with a hunger for the living is an unlikely – some would hope impossible – scenario. But the fact that mathematical models of disease spread can even handle this situation shows how versatile they are. While the zombie interpretation may be lacking in practical uses, the same ideas could be transferred to other situations where ‘dead’ members can come back into play. The authors suggest the possibilities of infections with a dormant stage, or political allegiances.

And of course, it is reassuring to have a plan. Just in case.