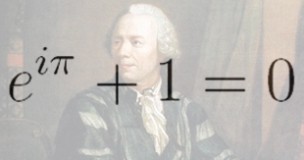 Can maths be beautiful? Most people understand the beauty of a painting or a piece of music, but what about the squiggles of a mathematical equation? We call great works of art “beautiful” if they are aesthetically pleasing or express fundamental ideas in a profound way, and mathematicians feel the same way about particularly elegant proofs. Many say the most beautiful result of all is Euler’s equation:

+ 1 = 0. Leonhard Euler (pronounced “oiler”) was a Swiss mathematician in the 18th century, and is considered to be one of the greatest of all time. But to discover the beauty of Euler’s equation, you have to understand its meaning.

Let’s start with the numbers. You should be familiar with

from your maths lessons at school. Divide the circumference of a circle by its diameter and the answer will always be 3.14159…, a decimal number that trails on forever. Numbers like

are called “irrational” because they can’t be written as a ratio or fraction.

The number e is also one you might have met at school. It crops up in many different areas of maths, science, and business, because the function f(x) = ex has the useful property of being its own derivative. In other words,

This comes in handy for modelling processes like radioactive decay or interest payments, where the rate of change is proportional to the value you start with. Like

Numbers that never end are pretty strange, but i is even weirder. Multiplies of i are called “imaginary numbers”, but they’re no less real than the “ordinary” numbers. Mathematicians first used them to solve a problem with square roots, but they crop up in everything from electrical engineering to computer graphics.

By now you might be wondering what any of this has to do with “beauty”. These numbers are clearly useful, but it’s their combination that makes them beautiful. Rearranging Euler’s equation, we get

. It seems almost impossible that these three strange numbers can unite to produce such a simple result – what does it even mean to raise e to the power of

isn’t as simple. Euler realised he needed a new method of exponentiation to handle complex numbers, and turned to the infinite for help.

The Taylor series of function turns a simple f(x) into an infinite sum. Any function that satisfies certain conditions can be expressed as a Taylor series, including

And by grouping real and imaginary parts we get:

We’ve cracked it. Now all that remains is to substitute

Euler’s equation expresses a universal truth, valid in any language or culture. It contains five of the most important numbers in maths: 0, 1, e, i, and

, along with the fundamental concepts of addition, multiplication, and exponentiation. These vital numbers and concepts also crop up in branches of science, engineering, and technology. All these ideas in just a few squiggles – if that’s not beautiful, what is?