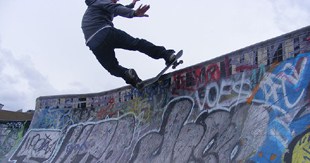 Design your own skate park

Home / Design your own skate park

Skateboarding is not a crime. It’s a hobby that increases your independence, gets you fit, and gets you out of the house. But since skating in public places can considered one – and let’s face it, sometimes the urban environment just doesn’t contain enough half-pipes – councils are building more and more custom skate parks. Creating a safe, stable environment with lots of potential for free-riding and tricks takes the input of a lot of skaters, and a fair amount of maths.

Since skateboarders ideally experience very little air resistance or friction, they are great candidates for modelling using mechanics. This can be done manually, but since they move in three dimensions and there are a lot of variables to take into account – a skate park should be suitable for both beginners who travel slowly and experts who can get up more speed – specialist software is commonly used.

One way for skaters to build up speed is to convert their gravitational potential energy into kinetic energy by going down slopes. These could be ramps, pipes, or just a gradient across the park. Skate park designers use data gathered by map-making surveyors (using more maths!) about the park’s site to figure out how much concrete they need to lay, in what contours, to make a good ride. They also make sure that rainfall on the park drains off rapidly.

Another way to get going is by pushing off and taking strides – as the skater pushes back on the earth, conservation of momentum propels the earth back a tiny amount and her forwards a lot more!

Skaters follow ‘lines’ between features in the park – for instance, getting up speed in a bowl, and then using it to get high up on a pipe. To keep the park interesting to skaters for a good long time, there should be lots of different paths that can be taken around the park, taking in obstacles in different orders without requiring sudden turns (which cause loss of speed). These lines of flow are intuitively obvious to skaters but are also described by some elegant work with differential equations.

Transition skaters pick up their speed from adjusting the location of their centre of mass when moving back and forth in bowls and pipes. This is a very similar form of movement to the swinging of a pendulum or the motion of a person on a swing – simple harmonic motion describes all of these ways of getting higher by travelling a curved path under gravity. Shallow bowls with a large radius are more appealing for less experienced skaters as they make the forces involved smaller and require less fine control. Bowls with really high curvature, on the other hand, let skilled skaters get up speed quickly and launch themselves higher than the lip of the bowl.

Once in the air, a skater is just another projectile – the equations of motion under constant acceleration tell you everything you need to know about what’s going on. To do tricks in the air requires, most importantly, time. That’s easy enough: the time spent in the air just depends on the initial upward velocity, since gravity’s not changing. That’s why you need to get up a certain speed before you can hope to do anything complicated in the air. 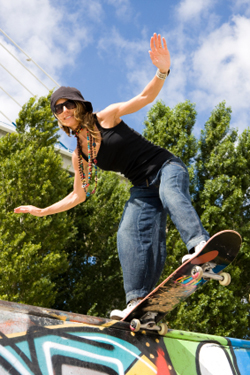 Though skatepark designers use software to design the parks rather than working out all the mechanics equations manually, the people who design the software certainly need to handle these equations! As the project progresses everything gets double checked by various teams – and here it’s an advantage to have an idea of the sort of calculations that are going on, to spot anomalous values. Skate park designers need to be cool not just with skating, but also with using calculators reliably, mental arithmetic as a safety net to avoid ordering twice as much concrete as necessary, and geometry to think about how things fit together. Building this kind of facility is a specialist application of civil engineering and so if this kind of big design project appeals to you, you might consider that as a career too. The built environment has a huge effect on the community around it – skateparks are a great example of this. The finished skatepark can become a centre for creativity and social interaction in the community, as well as an exciting facility which lets any skaters on the design team ride routes they have designed themselves!