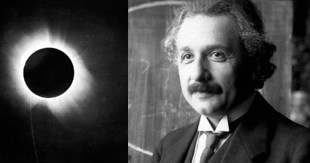 The father of modern physics

Home / The father of modern physics

Albert Einstein was a 20th century scientist who came up with some of the most important ideas in modern physics, such as the theory of relativity and the famous equation E = mc2. In 1921 he was awarded the Nobel Prize for Physics for his services to theoretical physics, in particular discovering the laws behind the photoelectric effect without which we wouldn’t have digital cameras or solar power.

Einstein was born in Germany on March 14th, 1879. He later moved to Switzerland where he worked for the Swiss Patent Office and did scientific research in his spare time. He continued travelling around Europe and working at various universities, before emigrating to the US in 1933 to avoid the rise of the Nazis in Germany.

Following the end of World War II in 1945, Einstein devoted much of his life to campaigning for peace. Having lived and worked in so many different countries, Einstein considered himself a citizen of the world and saw strong allegiance to one nation as dangerous. As a prominent Jew, he was offered the presidency of Israel in 1952, but turned it down because he felt he lacked the necessary experience. He died a few years later in New Jersey on April 18th, 1955.

Today Einstein is considered the father of modern physics. His work involved some very complex maths, but like many mathematicians he prized simple ideas and having an inquisitive mind rather than memorising facts from a book. As Einstein knew, studying maths isn’t about remembering as much as you possibly can – it’s about learning how to think logically and solve problems.