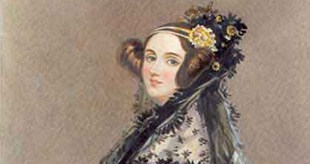 Ada King, Countess of Lovelace, was the only legitimate child of ‘mad, bad and dangerous to know’ romantic poet Byron. After her parents separated, she had no contact with her father. In fact her mother insisted she was home-schooled, which included lots of maths to drive out any possible insanity inherited from Byron.

At 17, her remarkable maths abilities began to show. Through her connections she met many scientists, including Faraday and Charles Babbage. Babbage, acknowledged as the father of computers, admired her greatly and corresponded with her often. She translated a memoir about his proposed Analytical Engine, a mechanical general purpose computer. But her translation went further. She added explanatory notes, which include working instructions for using the engine to calculate the Bernouilli numbers. It’s since been proved that these instructions were correct, making this the first programme and her the first programmer before the Engine was ever more than a concept.

Historical records are unclear, but she probably played a role in suggesting using punchcards. Inspired by a type of loom, this technical addition allowed different external inputs to trigger different sets of instructions. Her breadth of vision showed her applications for the Analytical Engine, which Babbage never considered. She contemplated applying its processing power to concepts outside the realm of pure number, suggesting that it might compose pieces of music or treat abstract thought. She truly deserves Babbage’s name for her: The Enchantress of Numbers.

For more information, you can check out a Lovelace comic, the original (non-working) Analytical Engine at the Science Museum, and a more in-depth article about Lovelace in Plus magazine.