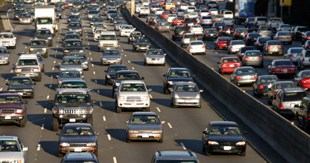 We’ve all been there. You’re already ready running late and the cars in front of you slowly grind to a halt. The seemingly never-ending queue of vehicles stretches into the distance, edging forwards every few minutes. You continue driving at a snail’s pace until the cars in front suddenly begin to pull away. With no sign of an accident or other serious incident you race to your destination, wondering what caused the delay. “Sorry I’m late,” you explain on arrival. “The traffic was bad.”

You’d think after more than 125 years of motoring we’d know how to drive from A to B without bunging up the roads, but traffic is a difficult problem to solve. Mathematicians have come up with a couple of ways of describing traffic, both in terms of individual cars or all the vehicles on the road.

One way of thinking about traffic is the relationship between the speed of each car and how much space there is separating them. Theoretically cars could race along the motorway bumper-to-bumper while driving at 70mph – as long as everyone keeps up the same speed, they won’t get any closer to the car in front of them. In practice this approach would be a recipe for disaster, as just one mistake would lead to a massive pileup. More sensible drivers make sure to keep a good distance between themselves and the person in front, and monitor their speed to maintain this distance. A simple model of the situation is the equation:

You can solve this equation with a technique called the Laplace transform – visit Mathworld to find out more. It’s not possible to get an exact solution, but it turns out the general behaviour of the cars depends on the value of

The cars can gradually move closer together, spread out and bunch up, or other variations of movement that we often see on the road.

Another model of traffic treats cars as a fluid, flowing down roads and through junctions like a liquid or a gas. Working like this means you don’t have to worry about the positions of individual cars, but instead concentrate on traffic density ρ (the number of vehicles per metre of road) and traffic flow Q (the number of vehicles passing per second). The two variables are related by a third, the average car speed U, with the equation

When the density is low so is the flow, as few cars on the road overall means few entering and exiting. When the density increases, the average speed will fall as drivers become more cautious, but the flow will increase because there are more cars passing through. Unfortunately, this steady stream of cars doesn’t last. Eventually the road will reach a maximum flow, and with speeds continuing to fall, the density will increase until the road is full up and drivers start honking in anger at the ensuing traffic jam.

Related equations describe how traffic can spread along a road in waves; as cars near the front of the road escape the jam, other drivers join the tail end and the wave propagates backwards. Mathematicians working in Japan have conducted experiments on a circular track that show this phenomenon in action – see New Scientist for more details, and a video of the experiment.

No one enjoys sitting around in traffic, but congestion costs more than just your time – the Confederation of British Industry estimates that time spent in traffic jams loses the UK around £20 billion a year. Research into finding why traffic occurs and new ways to prevent jams helps us all have quicker and less stressful journeys, and maybe with enough work traffic could one day be a thing of the past. Better start thinking of a new excuse for being late.