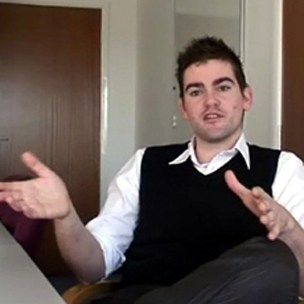 James Connell works as a Civil Engineer at design, engineering and project management specialist Morgan Professional Services in Stratford-upon-Avon. He uses Maths in the design and construction of buildings.

What is your background in Mathematics?
I enjoyed Maths at school and, in particular the material on Mechanics which I learned at A Level. I originally thought I might become a pilot with the RAF but decided to find out about some other options. My brother did a degree in Engineering at university and so I had an idea of what was involved in that area and that I could utilise my maths in it. I really liked the idea that I could find out how buildings worked. I investigated which degrees and careers would suit my interests and chose a degree in Civil Engineering at Oxford Brookes University. I found that there was a lot of Maths involved and discovered that a number of topics from Mechanics, such as Statics, Dynamics and Structural Mechanics, are very important in designing and building structures.

Did you have difficult finding vacancies while job hunting?
The great thing about my choice of degree is that a career was already clear for me. I already knew when I was doing my degree where I wanted to apply my mathematical skills. I was fortunate that I did an industrial placement year during my degree which gave me valuable experience in the world of work. I was based on site mostly with the site manager and used a lot of maths in calculations. After I graduated my interests moved onto working as a consulting civil engineer.

What skills do you use in your job?
A lot of the work here at Morgan Professional Services is concerned with consulting and contracting. As a consulting civil engineer you liaise with a client and plan, manage and supervise the construction of projects. A contracting engineer oversees the actual construction work on site. For me, consulting is where the more challenging maths work comes in. An architect will come to us with their concept for the design of a building and it is our job to analyse and design the structural components and overall structural stability and integrity of that building, providing a safe and viable solution and turning the concept into reality. We use mathematical equations and a lot of Mechanics to be sure that the concept for the project can be realised. There are many other skills that are very beneficial in my line of work. For example, I need to communicate my findings to colleagues frequently so social skills are good to have. Additionally, I have to use some project management skills when I am directing a team of colleagues on specific tasks.

Has your perception of Mathematics changed in moving from an education atmosphere to the world of work?
When you are doing work in school you don’t always see the wider context of what you are doing. But when I use maths in my job, I get to see the finalised building and there is great satisfaction in knowing that I played a big part in its construction.
Many universities offer modules and courses in the Mathematics behind James’ work. These will typically come under the heading of ‘Structural / Civil Engineering’
RELEVANT CLASSROOM MATHS: Mechanics, Statistics, Differentiation, Integration