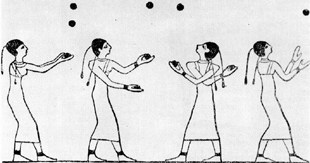 When you can’t juggle, watching someone do it is amazing – how can three or more objects be kept in the air when you’ve only got two hands? If you can juggle, you can’t help wondering how far you can take this, how many balls you can manage and just what is possible with those hands.

There’s a surprising amount of overlap between mathematicians and jugglers – maybe it’s the ability to concentrate and work hard to grasp a skill that seems hard and pointless at first, or maybe they just find the rhythmic counting soothing. Either way, juggling mathematicians have come up with a way of writing down, talking about, and hypothesizing new patterns of throws and catches using their mathematical properties.

The first step in solving a problem is often to break it up and make it simpler. Juggling is no exception – while there are lots of juggling tricks that involve crossing your hands over each other, throwing from behind your back, and so on, it’s easiest to start with one hand on each side and have them take it in turns to catch balls, never operating at the same time.

The simplest kind of juggling uses three balls and both hands. The hands alternate throwing balls, which describes a parabola before landing in the opposite hand ready to be thrown again. At any given time there’s one ball in the air, and one ball in each hand. Everything is perfectly symmetrical and egalitarian, with each ball staying in the air for the same amount of time. With these restrictions each ball is thrown every third beat and travels between the left and right hands.

What if we extend it to four balls? If we stick to the same rules, we have to throw each ball a little higher to get more time to include an extra one in the pattern, and the balls no longer get to change hands during the course of the juggle. 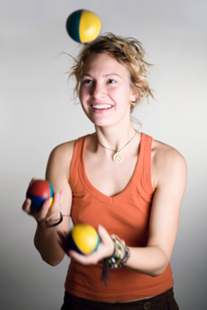 This brings us to the concept of cycle time. As you add more balls, you need more time to deal with them all, and so they need to be thrown higher to spend more time in the air. We designate the height of throw needed for a simple 3 ball pattern as a ‘3’, a four ball pattern as a ‘4’ and so on. Now we can write down the sort of throws we’re launching on each beat. Armed with this, we can depart from our boring old ‘all throws the same’ and use some new notation to work out what juggles are possible.

What we’ve been doing before is a simple repeat, every throw the same. For a 4-ball pattern that would be written

Can we mix it up a little without getting ourselves into a state where we need to catch two balls at the same time? It seems so, as long as we follow a long throw with a corresponding short one.

Since the balls swap their places in the pattern, this way of writing down tricks has come to be known as site-swap notation. There are other variations that can be inserted into a 4 ball routine:

This last pattern shows the power of analysis: no one knew this trick existed before the invention of this notation, and it’s proved useful as way of working up to a full 5 ball juggle. Since jugglers tend to be in to technology as well, it’s perhaps not surprising that programmes exist which can animate a pattern to check it works, allow the performer to see what they’re trying to do, or even watch tricks which are humanly impossible.

Studying the tricks that are possible has revealed some interesting and unexpected mathematical properties in the number strings that represent them. Firstly, the mean of the numbers in the string gives the number of balls that are required for the pattern. So the pattern 45141 requires (4+5+1+4+1)/5, or three balls. Another, more complex rule tells you the number of variations that exist for a routine n throws long using b (or fewer) balls – bn. Which answers our earlier question: if you’ve got the time, you can keep juggling different variations until your arms drop off. Through maths, jugglers have learnt to improve and diversify their performances, and communicate their favourite tricks with each other wherever they are in the world and whatever language they speak. Not bad for a feat of notation.