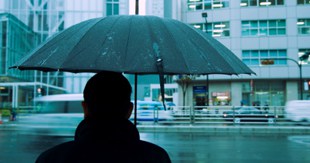 The weather is one of the biggest external influences on human society, as well as providing the English with an inexhaustible topic of conversation. However, it’s also extremely complicated! To know whether you’ll need an umbrella tomorrow at 2pm, you need to keep tabs on the state of the entire atmosphere, as well as the whole surface of the Earth! But this seemingly-impossible task is very important – not just for organising picnics, but for the agricultural, transport and building industries, among others. And that’s not counting the occasional extreme weather events, where early warnings can save lives. Thousands of mathematicians work on this complicated and important problem using some complicated and important maths!

In order to predict what the weather will get up to in future, scientists need as much information as possible about what it’s doing now. Scientists design weather recording stations to go everywhere in the world and cope with the harshest conditions. Space-bound satellites have to cope with even more extreme situations! This short video shows in more detail how mathematicians are involved in their design.

Even with the most careful planning, some wrong data can creep in due to small changes in the environment, such as plants shielding sensors. Statisticians analyse the data that the sensors pick up and determine which, if any, points are not realistic, and how reliable the rest of the data is.

So, you’ve found out the humidity, wind speed, temperature and cloud cover across the atmosphere using your sensors. Now to feed it into a virtual model of the planet, and apply the equations governing the movement of fluids to see how it will evolve in future. These are called the Navier-Stokes equations, a set of differential equations that describe all the complicated aspects of flow. Unfortunately for meteorologists, the Navier-Stokes equations are notoriously hard to solve analytically, so much so that the Clay Institute offers $1 million for a complete solution], or alternatively a proof there isn’t one. Instead computer simulations are used which replace the continuous differential equations with a discrete series of steps, and iteratively process how these ‘blocks’ of atmosphere interact with each other. As computers get more powerful, the size of the blocks gets smaller and smaller and the resolution of the predictions correspondingly better – but there’s still a way to go.

Working with the weathermen

Aside from the aforementioned one million dollars for a theoretical understanding of these things, meteorologists and atmospheric scientists are always working on ways to refine their predictions. They work in academia, and for the Met office; but also for the military, TV and radio stations, and as consultants to the industries to which the weather matters. If you fancy yourself as photogenic, you might consider become a TV weather forecaster – but you’ll still need to have a good understanding of how the atmosphere behaves in order to clearly and accurately describe what’s going on to the viewers. The weather is inherently unpredictable, and as long as people want to go outside meteorologists will be needed.