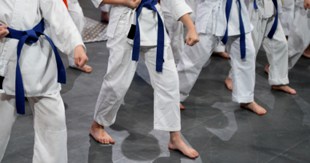 Training in the martial arts develops strength of body and character, confidence, and the ability to kick an opponent’s liver out through his nose. Accomplished martial artists can triumph over a stronger opponent relying on brute force by using spot-on technique, leverage and knowledge of the body. Mechanics, the mathematics of how things move, can explain how a little old man bests several muscle-bound opponents.

How hard a strike is depends on the amount of energy the attacker’s arm or leg has. Kinetic energy, the energy that comes from movement, is given by the equation

(m being the mass of the limb, and v the speed of the movement). There’s nothing the martial artist can do about the weight of her limb – although she can put more of the weight of her body behind it, this will cost her some balance and stability. So the way to transfer more energy to the attacker is to punch faster. Since the speed term is squared, punching twice as fast will result in a hit which is 4 times harder. However, an opponent who is twice as heavy only hits twice as hard. This means that lighter people can compensate for their lack of mass by upping the speed with which they punch. In numerical terms, a smaller opponent only needs to up their game by 22% to match a 50% heavier opponent.

How to break blocks 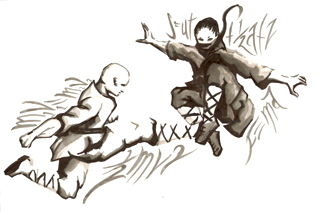 When training to break boards, karate students are often told to punch ‘through’ their target. This is because if you aim to finish beyond the target you will not slow down before the moment of impact. Newton’s law tells us that

Of course effective fighters defend as well as attack. Using leverage, a smaller, lighter individual can divert a heavier opponent. A small pull or push far away from the centre of mass of the attacker can have a big effect, sending them careering off or down to the ground. When the opponent is down, the defender may choose to immobilize them. This is often done with a lock. Applying arm- and leg-locks also relies on choosing where to place pivots and apply force.

You can see how locks work by analysing them in terms of moments. The person applying the lock places a pivot point just after the joint, and applies force as far away as possible down the limb to maximise the moment of force they apply. The person recieving the lock, meanwhile, tries to oppose this with the strength of their muscles – but muscles attach very close to the joint, so they need to be very strong to overcome this handicap. Most people aren’t.

In the heat of a sparring match, people don’t think about maths, relying instead on training and instinct. But understanding how the techniques work can lead to a better knowledge of how to apply them, as well as suggesting adjustments to suit your own personal style and strengths.