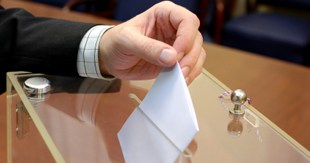 Some maths, one vote

Home / Some maths, one vote

Voting sounds easy. Whether you’re electing a politician or picking the best act on X Factor, the fairest method is to tally the votes and choose the person with the most, right? Wrong. That works fine with just two candidates, but when you have three or more options to choose from, it’s mathematically impossible to find a fair way to vote.

The first person to think about this “paradox of voting” was Marquis de Condorcet, a French mathematician who lived during the 18th century. He came up with the following situation. Suppose three friends are trying to decide what flavour pie to share, apple, banoffee, or cherry. Each person writes down which flavour they prefer:

Here the symbol “>” means “is preferred to”, e.g. voter 1 prefers apple pie, followed by banoffee, with cherry as a last resort. With no clear consensus, how do we pick a winner from these votes? Let’s say voter 1 gets their way, and the three friends tuck in to a warm apple pie.

When they’ve finished eating, voter 3 decides the choice wasn’t really fair. After all, voter 2 and voter 3 both prefer cherry to apple, because they’ve both written “C > A”. Begrudgingly, voter 1 agrees to share a cherry pie, but now voter 2 is unhappy. They prefer banoffee to cherry, and so does voter 1, (look for “B > C” above) so surely they should have banoffee? By this time, everyone is sick of pie and they decide to buy some ice cream instead.

This silly example illustrates a serious point: you can’t always pick a winner everyone agrees with. In the early 1950s, the American economist Kenneth Arrow went one step further. He said that under certain reasonable democratic assumptions, it’s impossible to design a voting system that always produces a fair winner, a result now known as “Arrow’s impossibility theorem”.

Any voting system you can think of will break one of Arrow’s democratic rules. The system used in UK parliamentary elections, known as plurality voting or first past the post, can often break a rule called “independence of irrelevant alternatives”. Put simply, the rule says that if I offer you a choice of apple or banoffee and you pick banoffee, you shouldn’t change your mind to apple if I also offer you cherry.

The same idea should also apply to politicians. The UK is divided in to regions called constituencies, and the people in each constituency vote to elect a Member of Parliament to represent them in the House of Commons. The winner is the candidate with the most votes, but they don’t need to have a majority (i.e. more than 50%) to win.

Imagine an election with two candidates, A and B. Candidate A gets 40% of the vote while candidate B receives 60% and is declared the winner. But what happens if we add a third candidate C, whose political views are quite close to B? This time, A loses a few votes to C but still receives 34%, while the rest of the voters are split between B and C who take 33% each. Now A is declared the winner, but two-thirds of the constituency are left unhappy with an MP they didn’t vote for. Is that particularly fair?

Arrow’s impossibility theorem doesn’t just apply to theoretical examples. The US presidential election in 2000 between George W. Bush and Al Gore was an extremely close race, with quite a controversial result. Some people say that a small number of votes for a third candidate, Ralph Nader, cost Gore the election due to the “spoiler effect” discussed above. You can read more about the election at Plus magazine.

Does all this maths mean there is no hope for fair democracy? Not quite – because it depends how you define a voting system. Arrow only allowed systems that rank the candidates in order, but other methods do exist. One example is range voting, which is used on websites like YouTube to rate popular videos. Voters assign each candidate a score between a particular range, say 0 to 5, and the candidate with the highest average score wins.

Arrow disallowed this type of voting because he felt the values assigned have no meaning. If you vote for apple over banoffee, that’s a clear statement of preference, but what exactly does it mean to score apple “4” and banoffee “3”? So even though range voting satisfies all of Arrow’s rules for democracy, the impossibility theorem still holds because he specifically excluded scoring systems.

That might feel a bit like cheating – if range voting is otherwise the most democratic system, why don’t we use it? It’s partly an issue of complexity. Marking an “X” next to your favourite candidate is pretty easy, but scoring all of the candidates in the running is a little harder. The calculations involved, compared to the simple count of plurality voting, could also delay the quick announcement of results. When it comes to voting, it seems you really can’t please everyone.