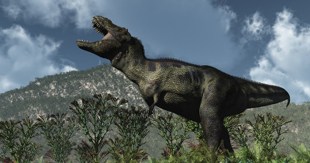 Dinosaurs are the largest animals to ever to walk the Earth. Nothing around on land today can compare to massive creatures like Diplodocus or Tyrannosaurus rex, though the water-dwelling blue whale dwarfs even the biggest prehistoric monster. People who study dinosaurs are called palaeontologists, and their work can sometimes be pretty tough – how do you learn about an animal that died 65 million years ago?

Most of what we know about dinosaurs comes from fossils, which are skeletal remains left behind in rocks. Sometimes palaeontologists get lucky and find complete dinosaur skeletons, but more often only a few bones remain. Luckily, maths can fill in the blanks.

Imagine if someone told you they could work out your height just by looking at one of your teeth. It sounds impossible, but that’s what palaeontologists do for dinosaurs. As with all animals, dinosaur species fall in to groups called families. These aren’t families made from parents or siblings, but contain animals that are similar.

Palaeontologists can use this similarity to build a picture of a dinosaur from just a single bone. For example, there are many complete skeletons of the long-necked Diplodocus on display in museums around the world, but so far we have only discovered a few bones from some of its relatives, like the gigantic Amphicoelias.

An American named Edward Drinker Cope found part of an Amphicoelias backbone in 1877. The same bone in your body would be just a few centimetres across, but in Amphicoelias it was an enormous 2.7 metres high – roughly the same as Robert Wadlow, the tallest person who ever lived! That’s also about 2 to 3 times larger than Diplodocus, so if Diplodocus was around 26 metres long, Amphicoelias would have been a whopping 58 metres from head to tail and weighed about 122,400 kg. To get an idea of that size, imagine six buses parked in a row! But could there be an even bigger dinosaur out there?

The maths says doubling an animal’s size means each bone has to support eight times as much weight. Problem is, a bone’s strength is proportional to its area, so the bones are only four times as strong. Keep doubling and eventually they’ll buckle from the strain, leaving you with one very big and very unhappy creature. That’s why the blue whale wins out in the end – living in water means each bone has to do a lot less work. The longest blue whale ever recorded was only 33 metres, but it weighed 172,000 kg, easily beating Amphicoelias. Sorry dinos, but the maths isn’t on your side.