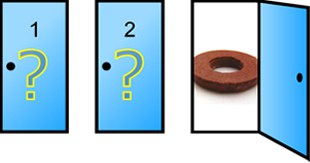 Sometimes common sense can lead you astray. There are situations where mathematics flies in the face of what seems obvious to provide a surprising answer. For an example of this battle between mathematics and human intuition, see the Birthday Paradox article where it is shown that in a group of 30 people there is a eyebrow-raising 70% chance of two people sharing a birthday.

The Monty Hall problem is another such example. Named after an American game show host it goes like this…

Imagine a television show where the contestant is offered a choice of three doors (they could also be boxes) with three prizes hidden behind. For this example, let’s say one door shields a diamond ring, whilst all you’d find behind the other two doors is a rubber ring.

The contestant makes his or her choice but that door isn’t opened. At this point the host, knowing what is behind all the doors, opens one of the other doors to reveal a rubber ring. Then, in a wicked twist, offers you the chance to swap your choice to the other unopened door. The big question is: do you switch?

Gut instinct would say there would be no difference between sticking and switching as one unopened door must be the diamond and the other the remaining rubber ring. So, given this 50-50 shot you might as well stick with your original choice as you’d kick yourself if you’d picked the diamond all along only to opt for the other door at the last minute.

This however, would only win you the diamond ring on a third of occasions and not half the time as naively expected. To see why it is always better to switch, it is useful to invoke game theory – an area of mathematics dedicated to problems involving decisions.

We can draw a “pay-off matrix” – a grid showing all possible outcomes of the game allowing us to see the most likely outcomes. Let’s assume the contestant initially chooses Door 1 and then host always opens one of the other two doors to reveal a rubber ring. Let’s look at the result of sticking or switching in the three possible door configurations.

So you can see that in two out of three scenarios you end up with the diamond if you accept the switch. The only time you lose when switching is if you actually picked the diamond in the first place.

This is an example of human intuition falling out of line with mathematical reality. People will insist that switching or not doesn’t matter because it is 50-50. But, whilst it is true that the two remaining doors will have one diamond ring and one rubber ring, that is not taking into account all of the information available to you!