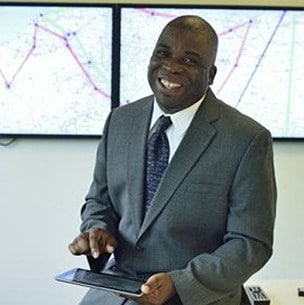 Where do you work? Babcock International Group

Babcock International Group is a multinational engineering company which specialises in managing complex assets and infrastructure.

What is your role?

How important is maths to this?

Extremely important, I could not do my job without mathematics.

How long have you done this job?

What are the best bits of your job?

What was your career path and how do you see this developing?

In essence, I am a professional mathematical modeller. It started with me completing my MSc in Industrial Mathematical Modelling at Loughborough University. After this I worked at an Automotive Research and Development centre writing mathematical simulation for car engines. This included a 7 months secondment in France. After this, I spent 4 years working for an IT company, writing mathematical simulation for an Aircraft Engines manufacturer. I was seconded for six weeks to the Netherlands, where I wrote a computer virus that create a module for a Formula One Engineering simulation. Furthermore, I spent six month working for an Energy Research company, joining the present company. During this time, I undertook a part time PhD in Statistical Physics.

How do I see my career moving forward, well if I become Professor of Mathematics at the University of West Indies, Jamaica, I will not be complaining much!

Maths and the IMA

Why is maths important to you?

I am proud to be a mathematician and here are some or the reasons why;

The British mathematician Sir John Kingman once said “Mathematicians are better if they stay a bit childish and play the game as a game. This is the key to teaching mathematics, it’s not to flood people with practical problems, rather it’s to say that this is the best game that has ever been invented. It beats Monopoly, it beats chess and it happens that it can enable you to land rockets on the moon. The real mathematical advances have been made by people who just loved it.”

Mathematics is a beautiful and powerful subject. It is part of our history, our culture and our future. A former British Prime Minister once said that “If countries are going to win in the global race and children compete and get the best jobs, you need mathematicians and scientists – pure and simple.”

Mathematics is the poetry of logical ideas. What other subject is the foundation of science, engineering and technology or influences the structure of art and music? Mathematics teaches geography to geographers, economics to economist and physics to physicist. Mathematics is truly a global phenomenon.

One can only truly appreciate mathematics by getting right in the middle of the challenging intellectual arena, to constantly pursue and the logically battle for that elusive truth. One of the most influential and universal mathematician of the 19th and early 20th century, David Hilbert, once said “ Distance in four dimensions means nothing to the layman. Even four-dimensional space is wholly beyond ordinary imagination. But the mathematician is not called upon to struggle with the bounds of imagination, but only with the limitations of his logical faculties.”

However, the layman knows when a song is sang out of tune or when a poem doesn’t rhyme, the same is true for mathematics. David Hilbert said “A mathematical theory is not to be considered complete until you have made it so clear that you can explain it to the first man whom you meet on the street.”

Why did you join the IMA?

To become a Chartered Mathematician. When I joined, I was still a year away to achieve the standard, but in my formative years, I felt it was important to gain this professional recognition.

What has the IMA done for you?

Network, encouragement, support and professional development. In my formative years, I met some of my mathematical heroes, those modern day mathematicians who inspired me to what I wanted to be. However, a big highlight was standing in front of an international assemble of mathematical modeller at a conference and saying “hello my name is Nira Chamberlain and I am the Chairman and Organiser of this symposium”. One of my proudest moments of my mathematical career.