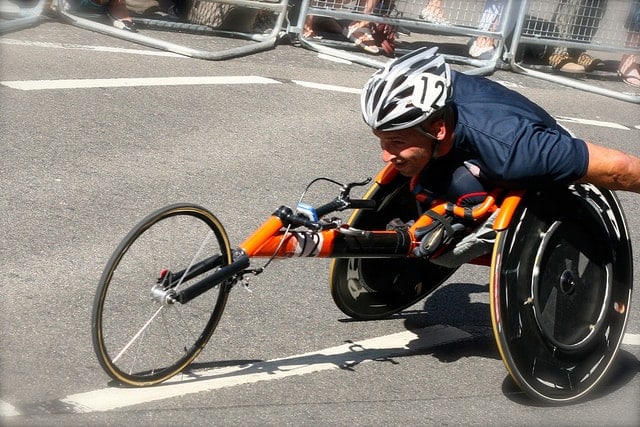 For several years, I have been fortunate enough to collaborate with Australian Hugh Daniel, who advises the International Paralympic Committee (IPC) on the methods that it uses to ensure fair competition among athletes with varying physical and mental abilities. How, for example, might one compare the performances of swimmers who have different levels of visual impairment?

Such comparisons are needed as some ability classes contain few competitors, and separate medal allocations for these athletes would detract from the achievements of competitors in larger classes. Rio 2016 includes 16 medal competitions for men’s 100-metres runners and none for cerebral palsy long-distance runners. If three athletes were to compete for the latter, they would all win guaranteed medals unlike the sprinters who must defeat many rivals to win.

One method that the IPC uses to compare different ability classes involves neutralising advantages by combining similar classes and excluding others, imposing the use of specialised technology such as eyeshades and wheelchairs, or ensuring that team members collectively satisfy a minimum aggregate handicap requirement. 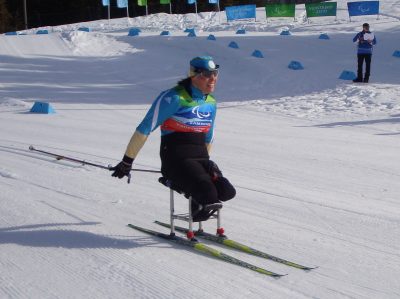 Another method that applies mostly to individual sports such as running, cycling, equestrian, swimming, rowing, sailing, triathlon, alpine skiing and cross-country skiing involves adjusting the results to reflect class abilities. These adjustments ensure that different classes of ability can compete against one another fairly.

My particular interest is in developing a method for adjusting the results to reflect class abilities using only the current competition results. This should lead to a handicapping system that simplifies and standardises the process, and readily adapts to encompass new technologies, sports, classifications and athletes. We are currently analysing the results from Rio 2016 to compare and contrast our method with the current method, and our approach can be illustrated as follows:

Consider a sport where the best results correspond to the smallest times, such as running and swimming. Now suppose that we wish to compare the performances of athletes across several distinct ability classes. Roughly speaking, we calculate the average time for each class and then multiply each athlete’s racing time by the ratio of the best class average to their specific class average. If athletes in a particular class generally take twice the time to finish as those in the best class, then their racing times will be halved to enable fair comparisons.

The choice of average is important. Rather than using the most common, arithmetic means, we use the medians for improved robustness against outliers and to lessen any opportunity for competitors to collude and influence results unfairly. We also modify the averages slightly to allow for varying class sizes.

On average, sitting skiers in class (b) clearly take less time to complete their race than those in other classes, partly due to the lesser distance that they cover. Their finishing times remain unchanged by our handicapping. However, after adjusting the observed results, we see that all three medals would be awarded to standing skiers in class (c). In practical terms, this is because those three athletes performed substantially better than other competitors in their class. Fourth place would be awarded to the best sitting skier and fifth place would be awarded to the best visually impaired skier according to this analysis.

These particular events actually supported separate awards ceremonies, so the best three athletes in each class won medals. However, this preliminary analysis suggests that this system might prove to be especially useful for competitions and events with fewer competitors. 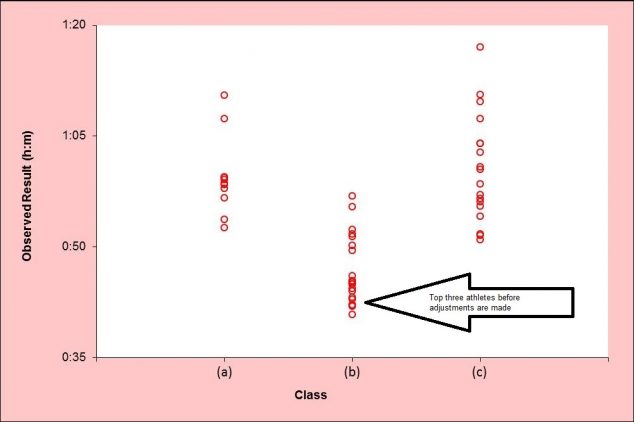 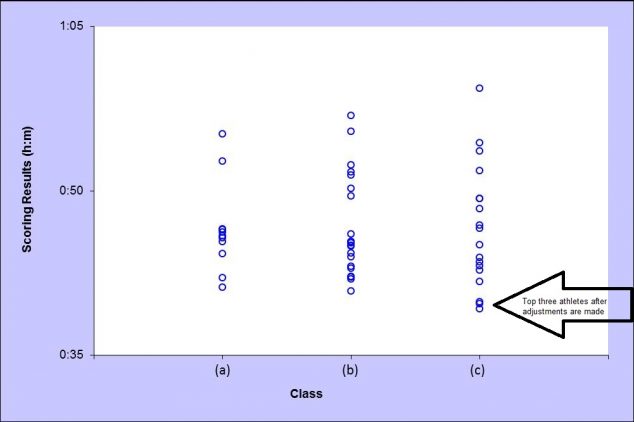