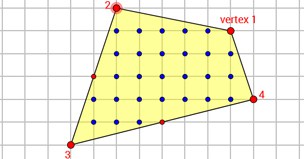 Pick’s theorem is one of those theorems in mathematics which seems too simple to be true. Take any polygon and lay it on a lattice. (A lattice is a grid of points where every point has whole number (integer) coordinates.) According to Pick’s Theorem all you need to do to find the area of a polygon is to count the points on the interior and on the boundary of the shape.

Pick’s Theorem then states that:

stands for the number of points in the interior of the shape,

stands for the number of points on the boundary of the shape.)

Take the polygon below as an example. In this polygon

. According to Pick’s Theorem,

which is the correct area of the polygon. 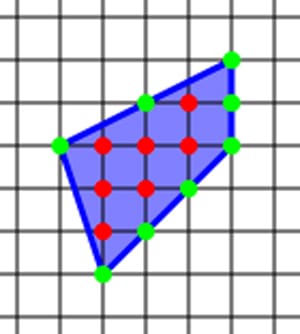 Pick’s Theorem does however only work for simple polygons – this means polygons which don’t intersect themselves and don’t have any holes, however it can be adapted to include holes.

Pick’s Theorem for polygons with holes 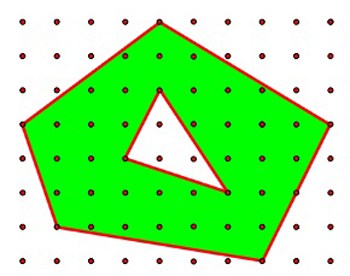 To use Pick’s Theorem on a shape like the one above you simply need to apply the theorem to the green shape without the hole and then subtract the area of the hole.

Total Area of the shape =

This approach can be expanded to a polygon with any number of holes. If you happen to be interested in the proof of Pick’s Theorem it is quite long but is not too hard to understand. A good explanation can be found here.

Pick’s Theorem can be used to show that you cannot draw an equilateral triangle on a lattice so that each vertex is on a grid point.

Imagine you have an equilateral triangle with base

. To work out the height in terms of the base we use Pythagoras’ Theorem: 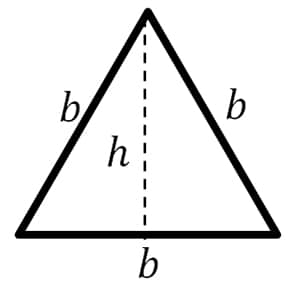 If we first calculate the area using the formula

If however we then suppose that we have drawn our equilateral triangle on the lattice points and that we want to use Pick’s Theorem, we would calculate that the

. This will be what is called a rational number – it will either be a whole number or a fraction.

We do however now meet a problem, as

must be what is called an irrational number. The reason for this is as follows:

is an irrational number. An irrational number cannot be written as a whole number or a fraction. Therefore we have proved that we cannot draw an equilateral triangle on a lattice so that all its vertices touch lattice points.

Why not now try drawing some polygons and watch Pick’s Theorem calculate the area.