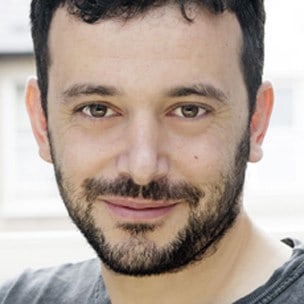 “In the Venn diagram intersection of published English language football authors and fluent Portuguese speakers, I think I was the only one.”

Why did you choose a maths degree initially? What were the benefits of doing philosophy alongside the maths? Maths was always my best subject at school, so it made sense to study it at uni. I also really enjoyed arts subjects. So when I discovered that there was a course that required me to use both the numbers and the words side of my brain, I knew it was the one for me.

What did you enjoy most about your time studying maths?
I was always most drawn to the philosophical side of maths, and I ended up writing a thesis about mathematical philosophy. That was the most intellectually enjoyable part of my degree. But what I had most fun doing at college was editing the university newspaper and running a nightclub.

When you finished your maths degree you started as a trainee reporter on a newspaper. What made you decide to switch from numbers to words?
At that stage, journalism was what really excited me. I thought for a moment about doing [a] post grad in mathematical philosophy, but decided against becoming an academic, possibly because my dad is an academic and I wanted to be different. I was not interested in the classic “number” professions like accountancy or banking, and, actually, I always thought that my mathematical background gave me an advantage in journalism.

So which of the skills that your maths degree gave you are useful in a career as a journalist?
Several. Every story you write has numbers in it. If you are numerate you know how numbers can mislead, so you make sure not to mislead. I was never afraid of graphs, or data, like many journalists are. I could sniff PR bull**** quicker than most. On the writing side, maths is all about structure. A news story is also all about structure. The idea that in journalism your job is to assemble and then present material in a coherent order seemed very natural to my mathematical mind. Also, reckoning skills come in handy – you are always having to make estimates, such as how many people are protesting at a certain demo.

What was the best thing about training to be a journalist?
I trained at the Westminster Press centre for journalists in Hastings. It was a five month course, and I learnt stuff that has been invaluable. Shorthand, which I still use. Libel law. I went to local council meetings and the local magistrates court for the first time, which I loved, since it made me understand how the country works.

Eventually you joined The Guardian and ended up in Brazil as their South America correspondent. What was it like living and working in Rio de Janeiro?
Great! It was the best job on the paper. I love immersing myself in a culture and writing about it – and I did that to my heart’s content for five years. I travelled all over the continent, learnt to speak Portuguese fluently and made lots of friends. It was also solitary though – my office was my flat.

Then, in 2006, you ghost wrote the autobiography for Brazilian football icon Pelé. How did you end up helping to tell the story of one of the world’s greatest ever footballers?
In 2002 I published my first book: Futebol, The Brazilian Way Of Life, which was a look at Brazilian culture seen through football. It was “critically acclaimed”, as the saying goes, being shortlisted for two sports book of the year prizes. As a result, when Simon & Schuster were looking for a ghostwriter for Pelé I was an obvious choice – in the Venn diagram intersection of published English language football authors and fluent Portuguese speakers I think I was the only one.

Your latest book, Alex’s Adventures in Numberland, sees you return to your mathematical roots. What made you go back and write a maths book having been away from it for so long?
Partly it was out of desperation. I returned from Brazil and was finding it really hard to make a living as a freelance. I was searching around for something to grip me. I tried out loads of things. When I first looked at going back to maths I did so a bit reluctantly, since it felt like it was a step backwards. But then I quickly realised how much fun it would be.

The book has been incredibly successful. Were you surprised about how keen people were to learn more about the stories of maths?
I am surprised that the book has been as successful as it has – but I’m not surprised that people are keen to learn about maths. The ‘wow’ you get from understanding simple mathematical phenomena is almost a sensual pleasure. My aim was to expose people to that.

What advice would you give the maths graduates of today if they were looking to move into writing?
The advice to all budding writers is to write. Write for your college magazine, write on a blog, just write! Because of the web there are lots of new opportunities for writers with a scientific bent. If I was leaving college now, I think I’d start up a blog a bit like Ben Goldacre’s Bad Science column in the Guardian – something provocative that reveals the maths behind the main stories in the news. It wont earn you any money at first – but it may end up getting you noticed, and then getting you a job.

Is there anything else that sets maths graduates apart that they can use to their advantage when trying to break into the industry?
One thing I haven’t mentioned so far is financial journalism. The news is fuller now of complicated maths than it ever has been – who can explain what a credit default swap or a bond yield is? I think that a maths graduate would be better placed to understand and then write about these concepts in a clear and accessible way. Science journalists nowadays have science degrees (they never did before), but financial journalists are still largely arts graduates (OK, I have no proof, but based on who I know that is the case). I think in the future many will be maths grads.

And what does that future hold for you?
A second maths book. To come out in 2013.

Find out more about Alex’s work at www.alexbellos.com