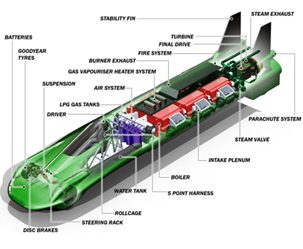 Product designer Matt Candy combines mathematical skills with practical know-how to create everything from aeroplane seats to coffee machines. He also helped to manage the team that broke the land speed record for a steam-powered car in 2009. Jacob Aron talked to him about how maths has helped drive his varied career.

What is the British Steam Car project?

In 1906, the fastest car in the world was a steam car and that set a record of 127 mph. The centenary of this record was coming up, and beating it was an academic exercise for some masters students down in Southampton University that ran in 1997 and again in 1999.

There was a connection between the senior tutor and the Steam Car Club of Great Britain, and a guy called Charles Burnett III was interested to get involved and started to gather interested parties.

What skills did you bring to the project?

I’m a product designer, not really an engineer. I’ve been involved mainly in product design, all sorts of things from Action Man to aircraft seats, and I’ve done concept cars and some race car work, but my engineering is quite lightweight, so its been more in the project management – I can talk to the engineers, but I can’t do the sums!

How did you break the record?

We bolstered up the team in late 2007 and got the car running with the idea of breaking the record in late 2008. The idea originally was to go to the Bonneville Salt Flats, (in the United States) but there’s a short season, due to the weather, when you can run. We made the first dynamic run in late in November 2008, which was just too late to go to America, and then we really had a problem, where do we go, and do we have to wait a year to run the thing?

The requirement was for a long run, we thought 6 miles would be sufficient to get the record. I phoned up Edwards Air Force Base, because they have this big dry lake bed, and it wasn’t until late June that they said we could go. I shipped the car in early June to Los Angeles, and we got the record in late August 2009.

How did maths help break the record?

In the early days you’re looking at how much power you need to move the car along, and the target was set at 200 mph. So that allowed them to set the gear ratios and start calculations about what tyres, the weight of the car, the drag, the acceleration. So you’ve got a simulation running of what the car might be, however actually understanding how to manufacture steam in a portable fashion at that rate really was a big problem and very hard to simulate.

A lot going on in the tubes of the boiler had to be done empirically, but meanwhile developing the steam was taking a long time, so the guys actually started building the car. It would be nicest to have all of the data and say “right, that’s the engine, that’s the boiler, let’s package them up, what’s the best format for the car?” and then build the car, but sadly there was so much development work over the 12 years that the decision was taken to get on and build the bits that we knew, such as the engine and the front of the car. So overall elements of it got a little bit compromised along the way.

That sounds a bit messier than the maths you learn at school?

It’s about capturing the data, understanding as much as you can, and working forward. You’re always taught to do one variable at a time and to try and isolate what differences you’re making, we didn’t have the time or the budget to do that, so in many cases we were having to make a couple of changes at least, and then interpret what was happening. You always hope that things are going to be pure and you’re going to get the best out of every element, but the reality is that you’ve got to keep as many at 80% as you possibly can to achieve the goal.

How did you first get interested in these kinds of engineering problems?

I had a tendency to want to be practical, and I did industrial design at Brunel University, which is an excellent course in covering mechanical, electrical, materials engineering and design, and gives you a very broad overview of these things.

What did you do after university?

I did some model making, that was the Action Man stuff, then got involved in one of the first lay-flat bed-seats for Virgin Airlines. Then I did some design stuff, concepts cars, motorbike crash helmets, then did bits and pieces for Steam Car, and I’m now at a place called PDD in West London, where I do product design. I’ve just been doing some work for a washing machine and a coffee-making machine.

So life as a product designer is quite varied?

It is inevitably varied, and you get to learn an awful lot about stuff. There’s a wide range and I tend to fall in the middle, my drawing and sketching is quite poor but my engineering is good. Generally at the beginning of projects you’re in the workshops. I just did a thing for a washing machine company, washing machines are trying to use less water in the future, and that means the way they use the powder is going to be different, so it’s literally funnels and hose pipes and all sorts of things to make something happen!

How is maths involved in that process?

There for instance, the soap powder, chemical reactions generally double every 10 degrees, so I can heat it up, ask how can I dissolve the powder, and then if you heat the powder up it tends to fix the stains. If you’ve got a good basis in maths and physics and you know how chemical reactions change, when you talk with the client you can ask a load of good questions.

What should people do if they want to become a product designer?

Stick with maths, the better understanding that you’ve got and the easier it comes to you pays so many dividends later on, so stick with it, and start to look at the real examples. The product and industrial design world is going up, we’ve got all these electric cars to make, all of these energy solutions that we need, the demand is crucial. The really great thing that’s happened over the last 15 years is things like SolidWorks, (design software), you can design on CAD beautiful things and there’s student licenses.

When I first started model making people would make models from two-dimensional drawings and sheet material, and now with rapid prototyping and stereolithography you can email three-dimensional files to a machine and have a rapid prototype come back within three days, it’s amazing! But get some practical experience, unless you get on a milling machine, or a lathe, or a drill, or you understand the basic application and engineering processes, you can design stuff that is either super expensive or impossible to make. It’s hard to employ 20-year-olds who can do the CAD but don’t know how to make what they’re drawing!