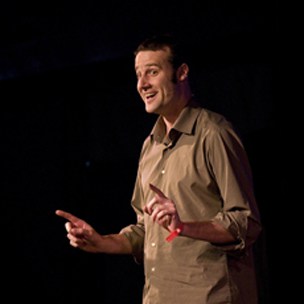 “The absolute highlight was walking out in front of 3,500 people at Hammersmith Apollo and shouting “Are you ready to do some Number Theory?”

Sum up what you do for a living in a paragraph.
My job is to get people more excited about mathematics. Much of this is going into schools to give maths talks and running workshops with students. I also run training for teachers and university students/academics to do my job for me; part of my work is to put myself out of a job. The rest of my time is spent writing and speaking about maths to anyone who will listen (mainly though radio and newspapers). Around all of this, I find time for my separate part-time career as a stand-up comedian, performing in comedy clubs all around the UK.

What is your average week like?
On average I spend 2.5 days a week in schools running sessions for students and 1 day at Queen Mary working in the Maths Department. Then I do around 2 evening talks or stand-up shows, which involves planning during the day and performing in the evening, often not finishing work until 11 or 12pm! Then I fit in about another 2 days of work writing articles or planning maths shows and the remaining -0.5 days replying to emails and doing all the admin work associated with running my own company.

What is the best thing about your job?
That I do things I enjoy for a living. Teaching is fantastic fun and, while I miss being a ‘normal’ secondary school maths teacher, I still get to spend time in schools working with students. I also love performing on stage and so even though stand-up fills many of my evenings, it’s still good fun. Above all, I love talking about maths and so any opportunity to do that doesn’t really feel like work!

What is the biggest challenge in your work?
Mathematics is a difficult subject that – I’m prepared to admit – can be rather boring. My biggest challenge is to find the bits of maths that I find the most engaging and then work on a way to communicate them to other people who haven’t done years of maths study. Of course, all of this has to be done in an interesting and not-boring way!

How did you get into what you are doing? What did you do between graduation and now?
After graduating I worked as a maths teacher in secondary schools for three years. Then I started to do some work for universities providing maths and science support to schools. I’ve since gone back and taught in a school for a while as I gradually shifted into working for myself. Queen Mary have been fantastic giving me a part-time job to make my whole career viable! I basically decided what I wanted to do for a living and then set about forming a career out of it.

What skills are most important to succeed in your job?
To succeed as a maths communicator you need to be able to imagine yourself as someone who always hated maths at school and never really understood it. Then work out a way to communicate a mathematical concept so they they will find it as interesting as you do.

To succeed as a stand-up comic you need to be dedicated. Like any other skill or profession, it takes a lot of practice to become good at it. Loads of people can tell jokes and make their friends laugh; very few people will put the effort in to do several gigs a week, for years on end, to develop the skills needed to be a successful stand-up comedian.

So is it hard to do comedy routines about maths?
Yes it is! Which is why I don’t really tell any “maths jokes” as such. Most of my normal comedy, that I do in standard comedy clubs, is about being a mathematician and having a logical outlook on life.

When I’m doing actual maths talks, I don’t so much do jokes about maths as use the techniques of stand-up and replace the jokes with maths. So it’s a maths talk about real mathematics but it’s delivered with the rhythm and timings of a stand-up set.

What’s your favourite maths joke?
I’ve never forgotten a joke I heard when I was in primary school:

What did the zero say to the eight? Nice belt!

Needless to say, I don’t tell any jokes like that on-stage.

What has been the highlight of your comedy career to date?
I was part of the Uncaged Monkey’s tour that Robin Ince organised with Brian Cox. The show toured all of the major venues around the UK and sold over 30,000 tickets. The absolute highlight was walking out in front of 3,500 people at Hammersmith Apollo and shouting “Are you ready to do some Number Theory?”. They were.

Why are you so keen to spread the maths message?
People often wonder why it’s worth putting in so much effort to learn all the difficult bits of mathematics when they don’t plan to work as a mathematician. But they’re missing the point that learning maths isn’t just about learning content, it’s about developing thinking skills. Most of the content you learn in maths at school or university you will probably never use, but the thinking skills will last you a lifetime. A disproportionate number of people in comedy have a maths or science background because the same thinking skills you learn in maths can be used to write good creative comedy.